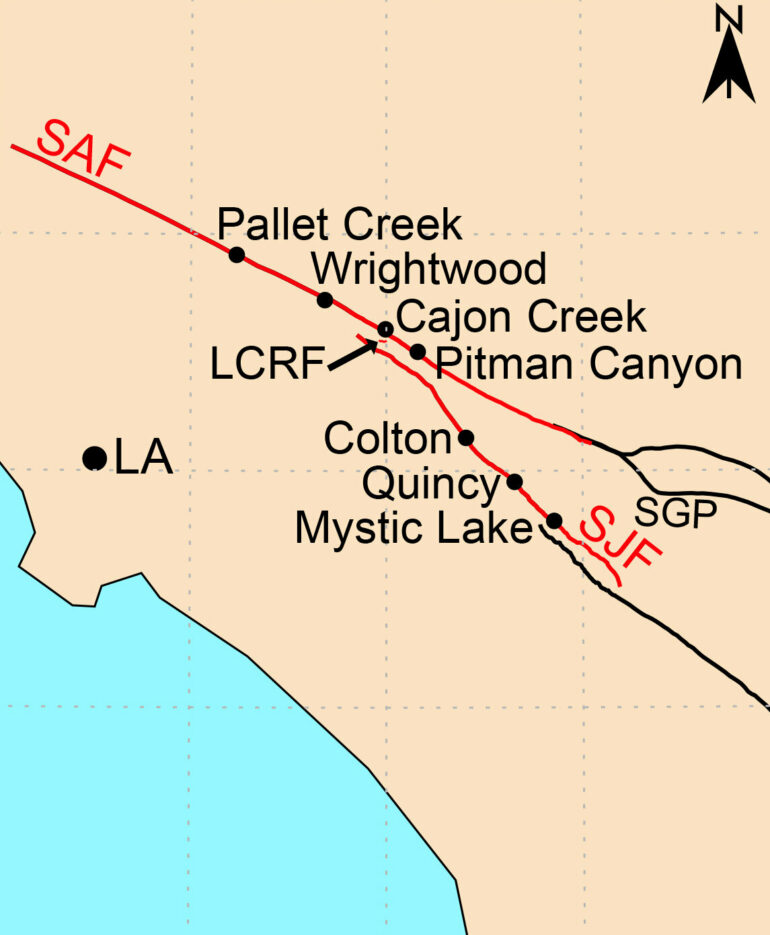 The San Andreas and San Jacinto faults have ruptured simultaneously at least three times in the past 2,000 years, most recently in 1812, according to a new study by geologists at the University of California, Davis, and San Diego State University. The work was published Dec. 7 in the journal Geology.

Large earthquakes involving multiple faults increase the threat of strong ground shaking. However, each of these faults on their own can generate a large-magnitude (7.5 or above) earthquake, said Alba Rodríguez Padilla, a graduate student at UC Davis and first author on the paper.

“Typically, we think earthquakes will remain confined to a single fault, especially for “mature” faults such as the San Andreas and the San Jacinto, which are well-established, geometrically simple plate boundary faults,” Rodríguez Padilla said. But researchers previously have shown that it’s theoretically possible for an earthquake to transfer from one fault to another where they come close together at Cajon Pass, north of Los Angeles, she said.

“However, prior to our study, there was no direct physical evidence that these joint ruptures, or shared earthquakes, do in fact occur,” Rodríguez Padilla said.

Between the south end of the San Andreas Fault and the northern end of the San Jacinto lies a small fault, the Lytle Creek Ridge Fault. This fault would slip only when there is an earthquake shared across the two bigger faults.

The Lytle Creek Ridge Fault does not itself do any work during these shared earthquakes, just acting as a passive marker, Rodríguez Padilla said.

To get evidence of potential shared earthquakes, Rodríguez Padilla and colleagues hand-dug a trench 15 meters long and 1.5-3 meters deep into the Lytle Creek Ridge Fault. They identified signs of three earthquake events in the past 2,000 years, based on radiocarbon and pollen dating.

Next, they simulated the historically recorded earthquakes of 1812 and 1857 to see if these could have been multi-fault earthquakes. Based on the simulations, they discarded the 1857 earthquake and found that the 1812 earthquake was capable of jumping faults.

The work was supported by the Southern California Earthquake Center, which is funded by the U.S. Geological Survey and the National Science Foundation.