Exploring the timing and mechanism of Tibetan Plateau uplift 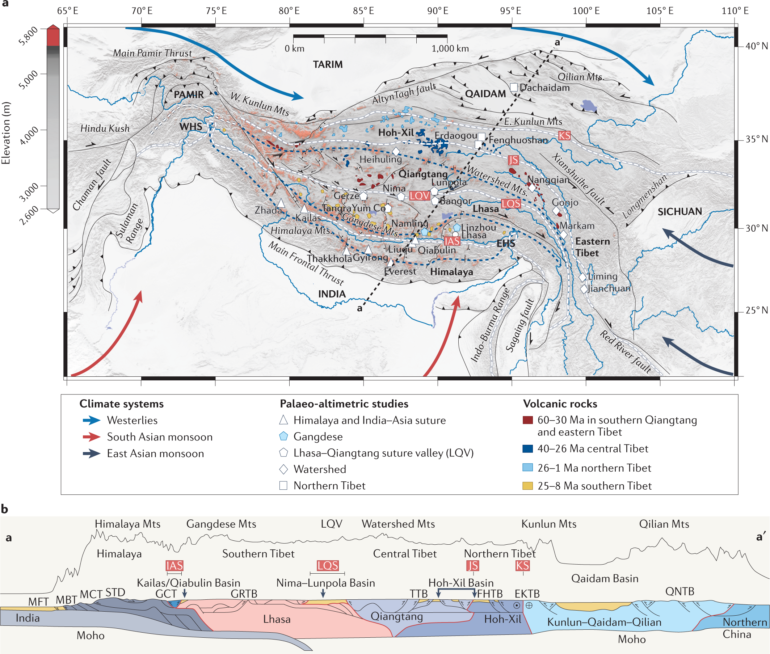 A research team led by Prof. Ding Lin from the Institute of Tibetan Plateau Research of the Chinese Academy of Sciences has systematically explained the differential uplift process and its related deep dynamic mechanism of the Tibetan Plateau since the Cretaceous.

The review article was published in Nature Reviews: Earth & Environment on July 28.

In recent years, with the accelerated generation of quantitative paleoelevation data, scholars have gradually recognized that the plateau is characterized by differential uplift, and the uplift time in some areas is either earlier or later than previously assumed, and none of the existing dynamical models can fully reflect the uplift process of the plateau.

“A complete evolutionary model of the Tibetan Plateau must take into account the heterogeneity of paleogeomorphology and lithospheric heterogeneity from Asia during tectonic events prior to the Indo-Asian collision, which is essential for understanding the differential uplift of the plateau,” said Prof. Ding.

Through detailed analysis of Cretaceous evidence on the Tibetan Plateau, the research team proposed that the collision of the Lhasa-Qiangtang terrane and subsequent northward subduction of the Lhasa lithosphere led to the initial growth of the Watershed Mountains; the continued subduction of the Neo-tethys Oceanic slab uplifted the Gangdese Mountains above sea level at ~95 million years ago and formed as Andean-type Gangdese Mountains, but the magnitude of surface uplift remains to be quantified.

The timing and mode of the collision of the Indo-Asian plates are the key to constrain the magnitude of surface uplift and deep dynamics of the plateau. Current hypotheses for the closure history of the Neo-tethys Ocean and initial collision of Indo-Asia include the Great Indian Basin model, the intra-oceanic subduction model, and the single-stage subduction-collision model. These hypotheses make very different predictions about the size of the Great India (the part of India that has subducted and disappeared beneath the Tibetan Plateau) and the timing of the initial India-Eurasia collision.

However, all of these models are based on one key evidence first discovered by Prof. Ding’s team, the foreland basin formed by the India-Eurasia collision, which began to receive provenance from the Gangdese arc region 65 to 59 million years ago, indicating that the India-Eurasia collision had already begun by this time. Therefore, the review points out that the single-stage subduction-collision model is the simplest and the one supported by geological evidence to explain the India-Asia collision.

Combining the available quantitative paleolatitude results and deep dynamical evidence, the research team further recovered the surface uplift history and lithospheric evolution of the Tibetan Plateau from about 60 million years ago to the present day, suggesting that the different orogenic belts of the Tibetan Plateau have different uplift histories. About 45–40 million years ago, after the breakoff of the Neo-Tethys Ocean plate, the more buoyant Indian lithosphere wedged northward horizontally, activating the suture zone in the north and south of the Qiangtang body to undergo intra-subduction, causing the Watershed Mountains to rise to a high altitude of 5000 m.

At this time, the Central Tibetan Valley between the Gangdese Mountains and the Watershed Mountains, the Himalaya Mountain in the south and northern Tibet remained at low elevation. The paleo-topography of the Tibet presented as “Two high mountains sandwiched a low land valley.” About 40–30 million years ago, the Lhasa lithosphere was dismantled below the Central Tibetan Valley, and a variety of coupled deep geodynamic processes, such as the shortening of the upper crust, magma inflation and upwelling, make the Central Tibetan Valley uplifted to 4500 m. About 25–15 million years ago, due to the continuous subduction of the Indian continent, the Indian continental lithosphere subducted beneath the Himalaya and the Asian continental lithosphere subducted beneath the Kunlun Mountains in northern Tibet were successively subducted, and the Himalayas and Kunlun Mountains were successively uplifted to their modern heights, and the plateau in the modern sense was formed. However, the uplift history of the northern region is still uncertain and needs to be verified by more quantitative paleo-altitude data.

The researchers point out that to address the timing and mechanism of the uplift of the Tibetan Plateau, future research is needed. And the research directions include: resolving the inconsistency between the amount of Indo-Asian convergence and crustal shortening, high-resolution paleoelevation data, Earth system simulation and combined geophysical imaging and geodynamic simulations.