For the first time, we can measure the thickness of Arctic sea ice all year round 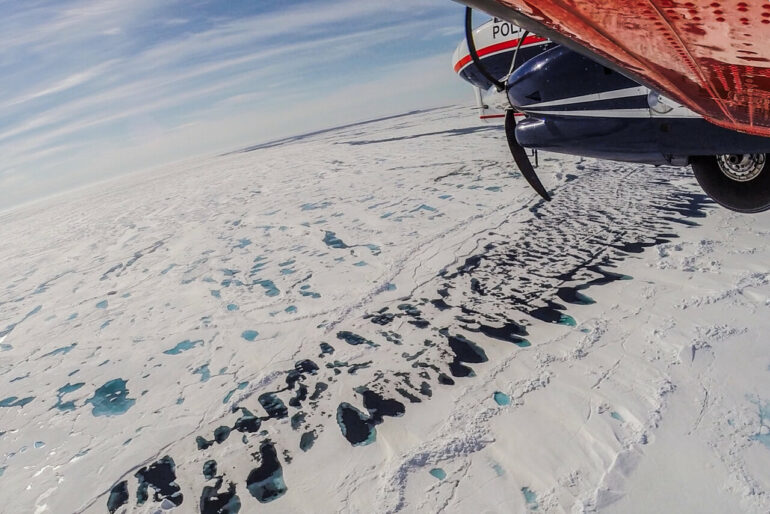 Using satellites, we are now able to measure ice thickness in the Arctic—even in the summer. This is of great importance for shipping in the Arctic and future weather and climate forecasts. The solution was developed by an international team, led by researchers at UiT The Arctic University of Norway and the University of Bristol.

“The Arctic ice is melting faster than ever. We need knowledge about the thickness of the sea ice, both to reduce safety risks for businesses and shipping in the Arctic, but also to make forecasts for the future climate,” says team leader Jack Landy at the Department of Physics and Technology at UiT who began the work while at the University of Bristol.

The research team has developed the first dataset showing the thickness of sea ice across the entire Arctic and through a whole year. The results are published in the journal Nature.

Satellites are dazzled by the melting ice

Satellites have been used to measure the thickness of ice in the Arctic since the 1980s. But the technique has only worked in winter, from October to March, when the ice and snow are cold and dry.

“In the summer months the satellites are dazzled by ponds of snow and ice meltwater that pool on the sea ice surface. Then they have been unable to distinguish between melting ice and water,” says Landy.

Using AI to solve the problem

To solve the problem, the researchers have adopted Artificial Intelligence (AI) and examined previous data from the satellites. Now they know when the satellites register ice and when they register ocean.

In addition, the team has constructed a new computer model of the satellite sensor, to make sure it is measuring the correct height and thickness.

This is good news for the shipping industry.

Safer to sail in Arctic waters

Shipping in the Arctic has increased rapidly in recent years, because of the ice melting. Particularly in the Barents Sea and close to Svalbard the shipping activity is high during summer. To sail safely, the boats need information about where there is ice and how thick it is, in advance.

The Norwegian Meteorological Institute provide sea ice forecasts for the Arctic but have lacked secure ice thickness data for the summer months.

“Using the new satellite data, we are finally able to make sea ice forecasts informed by the ice thickness, not only for the winter, but also for the summer. This will reduce safety risks for ships and fishing boats,” says Landy.

“We can also predict whether there will be ice or not at a given location in September, by measuring the ice thickness in May,” he says.

Increased understanding of the climate

According to Associate Professor Dr. Michel Tsamados from University College London the findings are also of great importance for our understanding of the weather and the climate.

He is one of the researchers behind the study and explains that the new data can be used in advanced climate models to improve our weather and climate forecasts.

“When we use the new ice thickness data in advanced climate models, it will improve both our short-term forecasts for the weather at the mid-latitudes and the long-term forecasts that show what climate we will have in the future,” he says.

Provided by
UiT The Arctic University of Norway

Citation:
For the first time, we can measure the thickness of Arctic sea ice all year round (2022, September 14)