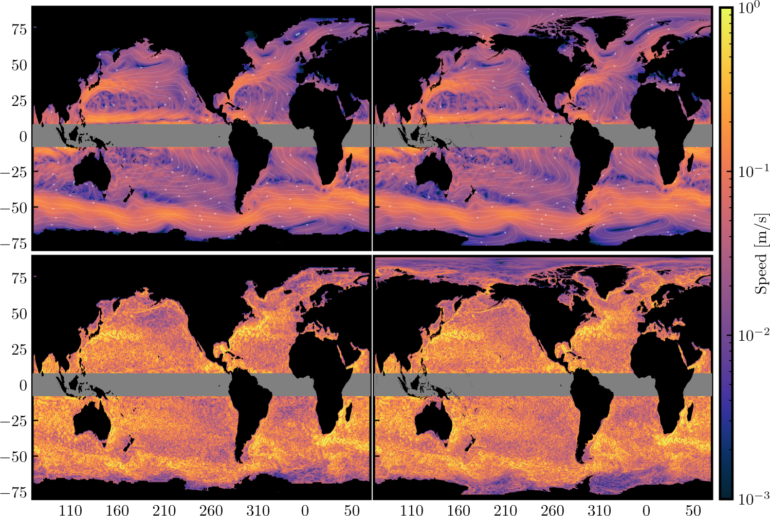 For the first time, University of Rochester researchers have quantified the energy of ocean currents larger than 1,000 kilometers. In the process, they and their collaborators have discovered that the most energetic is the Antarctic Circumpolar Current, some 9,000 kilometers in diameter.

The team, led by Hussein Aluie, associate professor of mechanical engineering, used the same coarse-graining technique developed by his lab to previously document energy transfer at the other end of the scale, during the “eddy-killing” that occurs when wind interacts with temporary, circular currents of water less than 260 kilometers in size.

These new results, reported in Nature Communications, show how the coarse-graining technique can provide a new window for understanding oceanic circulation in all its multiscale complexity, says lead author Benjamin Storer, a research associate in Aluie’s Turbulence and Complex Flow Group. This gives researchers an opportunity to better understand how ocean currents function as a key moderator of the Earth’s climate system.

Traditionally, researchers interested in climate and oceanography have picked boxes in the ocean 500 to 1,000 square km in size. These box regions, which were assumed to represent the global ocean, were then analyzed using a technique called Fourier analysis, Aluie says.

“The problem is, when you pick a box, you are already limiting yourself to analyzing what’s in that box,” Aluie says. “You miss everything at a larger scale.”

“What we are saying is, we don’t need a box; we can think outside the box.”

When the researchers use the coarse-graining technique to “blur” satellite images of global circulation patterns, for example, they find that “we gain more by settling for less,” Aluie says. “It allows us to disentangle different-sized structures of ocean currents in a systematic way.”

He draws an analogy to removing your eyeglasses, then looking at a very crisp, detailed image. It will appear to be blurred. But as you look through a succession of increasing stronger eyeglasses, you will often be able to detect various patterns at each step that would otherwise be hidden in the details.

In essence, that is what coarse graining allows the researchers to do: quantify various structures in ocean current and their energy “from the smallest, finest scales to the largest,” Aluie says.

Aluie credits Storer for further developing and refining the code; it has been published so other researchers can use it.

Provided by
University of Rochester