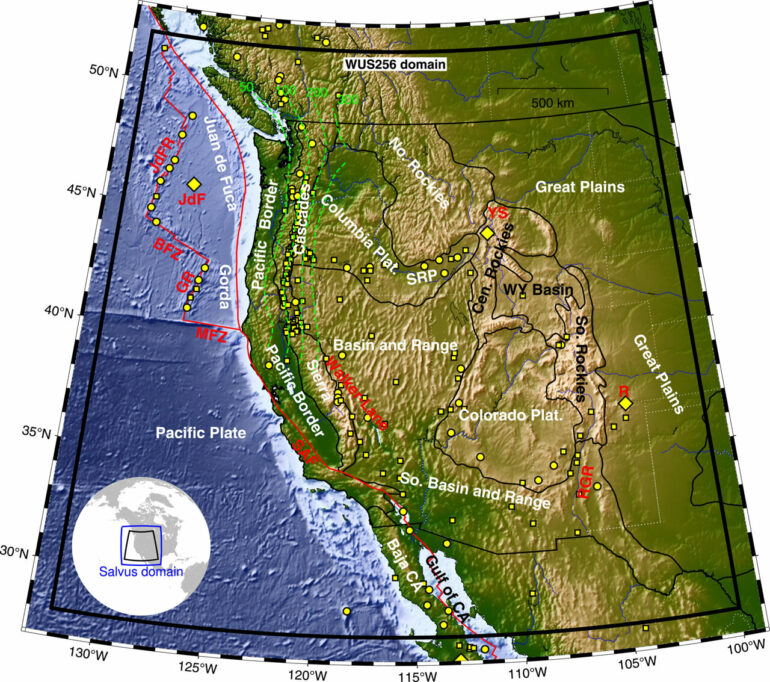 Seismic tomography is a method to estimate the inaccessible three-dimensional (3D) seismic material properties of the Earth, specifically the speeds of compressional and shear waves related composition and temperature variations. It provides images of 3D structures that relate to plate tectonic processes as well as models to better represent seismic wave propagation through Earth’s complex structure.

In the new research, scientists created a new model of the 3D seismic structure for the upper 400 km of the Earth in the western United States using adjoint waveform tomography (AWT). The model is produced by a computationally intensive waveform inversion process that updates the sub-surface model to improve the match to observed seismograms. In order to triangulate features in the model, AWT also is data-intensive, requiring many seismograms crossing the target region.

The team—made up of scientists from LLNL’s Geophysical Monitoring Program (GMP) and researchers from Mondaic, a small incubator start-up company from the Swiss Federal Institute of Technology—used more than 60,000 HPC simulations on LLNL’s Lassen supercomputer to run 256 model iterations for 72 earthquakes to fit nearly 100,000 seismograms.

“While other models of the western U.S. exist, this model is unique in that it is based on many more inversion iterations than previous models and provides much better fits to recorded seismograms,” said LLNL scientist Artie Rodgers, lead author of the paper. “It also can provide more accurate estimates of seismic source characteristics by removing distortion due to unknown 3D Earth structure in previous models.”

Researchers found that seismic structure is made up of 3D variations in compressional and shear seismic wave speeds and density, and horizontally and vertically polarized waves have different speeds.

While many seismic tomography studies focus on imaging of sub-surface structure, the primary motivation in the new work was the development of a 3D model for improved waveform fits of periods of 20 to 120 seconds after an Earth motion.

“We produced a more detailed 3D structure of the crust and upper mantle for the purposes of improving predictive capabilities of 3D waveform simulations for applications such as source characterization and/or long-period earthquake ground motion simulations,” Rodgers said. “Waveform fits are remarkably better with our final model compared to previous models of the same region.”

Nuclear explosion monitoring methods can benefit from 3D models that can accurately simulate short-period waveforms (20 s), which are strongly impacted by crustal and upper mantle structure. Similarly, earthquake ground motion hazard and risk studies require simulations of much shorter-period waveforms (less than 5–10 s) than found in the new model. However, Rodgers said the large-scale structure must first fit the longer period data before drilling down to the shorter period waves. Work to resolve finer-scale structure is underway.