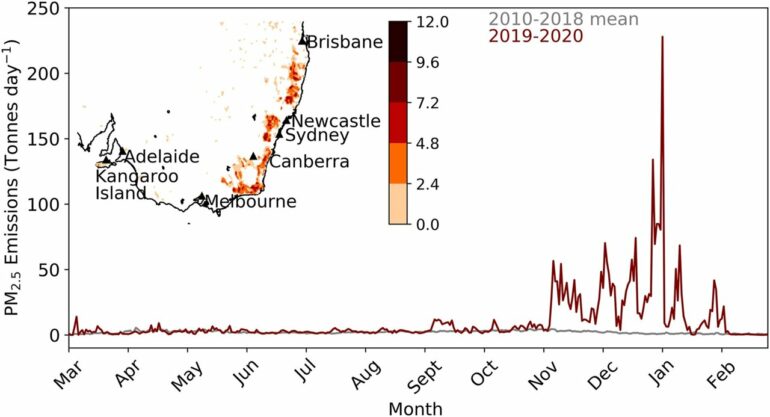 From October 2019 to February 2020, fire ripped through the Australian bush with unprecedented intensity, killing 34 people and more than 3 billion animals. In a new study, Graham et al. seek to quantify the health impacts of an indirect form of fire damage: the damage caused by poor air quality.

Like car engines, gas stoves, and cigarettes, fires create fine particles with a diameter of less than 2.5 micrometers, called PM2.5. High PM2.5 concentrations can exacerbate a wide range of medical conditions, from lung disease to cardiovascular disease, even leading to death.

By modeling PM2.5 concentrations over southeastern Australia during the period of intense fire activity, the researchers discovered that fire hot spots began to form as early as October and continued to grow over the next three months until at least 70 percent of PM2.5 particles in an area stretching from Melbourne to Brisbane stemmed from the fires.

Around 437,000 people were exposed to air with a PM2.5 concentration of least 25 micrograms per cubic meter of air, which is substantially more than the 15 micrograms per cubic meter of air that the World Health Organization considers an acceptable level for short-term exposure. At times, PM2.5 concentrations increased by more than 3.5-fold because of the fires, the authors estimate.

Using methodology developed by the World Health Organization, the authors estimated that increased PM2.5 levels brought on by the fires led to 171 deaths, or about 30 percent of the deaths caused by short-term PM2.5 exposure during this time. Sydney and Melbourne bore the brunt of the casualties, with 65 and 23 deaths, respectively, brought forward by bushfire PM2.5, and the rest were scattered throughout the southeastern portion of the country.

This study is the first to simulate PM2.5 levels using an air quality model while taking meteorological conditions and atmospheric processes into account. According to the authors, this method is likely to provide the most accurate regional PM2.5 exposure estimates to date, which is important, as wildfires are expected to increase as climate change leads to hot, dry conditions. Public health officials might draw from studies such as this as they strategize about how to keep populations healthy in the new climate era.