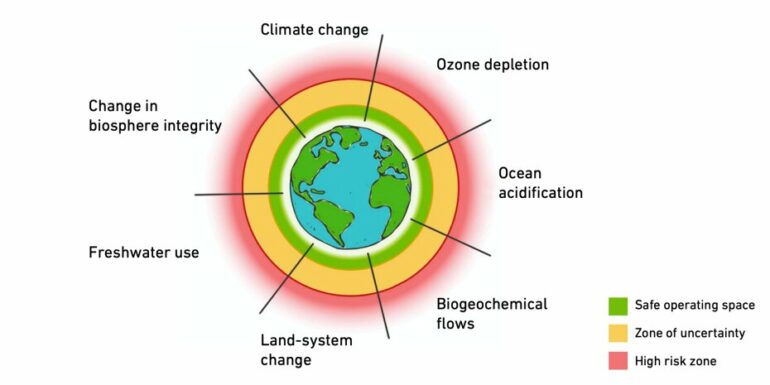 For the first time, researchers at ETH Zurich have calculated in absolute figures the extent to which the production of chemicals is currently interfering with nature worldwide—and the results are staggering. In addition to greenhouse gas emissions, the new method also takes land use and freshwater consumption into account.

More than 99 percent of the most widely produced chemicals aren’t sustainable; their production is based on fossil raw materials and consumes more natural resources than the Earth can provide in the long term. This is the conclusion of a sustainability analysis developed at ETH Zurich, which for the first time provides absolute figures on the global environmental impact of the chemical industry.

“Our method compares the resources that chemicals consume with the ecological budget of our planet—this is a new approach,” says Gonzalo Guillén Gosálbez, Professor of Chemical Systems Engineering at ETH Zurich. He led the study, which was recently published in the journal Green Chemistry, together with Javier Pérez-Ramírez, Professor of Catalysis Engineering at ETH.

Standard practice for sustainability assessments in the chemical industry today focuses on calculating a given product’s carbon footprint—from raw material through production to disposal. Known as life-cycle analysis, this allows a comparison between different types of production. However, it is of limited use in assessing global impacts on natural ecosystems.

Such conventional life-cycle analyses of chemicals often take only CO2 emissions into account, which bothers Pérez-Ramírez. “Climate change isn’t the only problem,” he says. “If we focus only on solutions that exclusively reduce carbon emissions, we may actually end up shifting environmental burdens to other categories and causing some collateral damage.”

‘Green’ chemicals are not always sustainable

Pérez-Ramírez uses the example of biofuels to explain how such ecological collateral damage can occur: When fossil fuels are replaced by plant-based raw materials such as corn or wood (known as first-generation biofuels), significantly less new CO2 is released into the atmosphere. However, it takes large areas of arable land, a lot of water and also fertilizers to produce the required biomass.

Therefore, the stated aim of the two researchers was to perform a more comprehensive life-cycle assessment for chemicals—and in doing so, to establish a direct link to the Earth’s ecological budget. They base their calculations on the so-called planetary boundaries. This scientific concept describes the impact of humans on nine key Earth-system processes, such as biodiversity loss and changes in land use.

In their study, the scientists calculated whether and to what extent the global production of a total of 492 chemicals exceeds seven of these limits. For this purpose, the ETH researchers linked existing data and accounting models on raw material procurement, the supply chain and the various production steps at a global level.

They found that more than 99 percent of the chemicals studied exceed at least one planetary boundary. Just three of the chemicals can be considered environmentally sustainable in absolute terms according to this new method.

Petroleum is the basic ingredient of chemicals

“The fact that almost all the chemicals studied were harmful to the environment hardly surprised us,” Pérez-Ramírez says. After all, more than 85 percent of the basic carbon structure that makes up most chemicals today is still obtained from fossil raw materials.

“If the basic chemicals are produced from petroleum, then all the products made from them won’t be sustainable either,” Pérez-Ramírez says. The planetary boundaries strongly connected to anthropogenic greenhouse gas emissions—climate change, ocean acidification, and biosphere integrity—are by far the ones that chemicals exceed the most.

But the authors of this work were surprised to find that some chemicals exceed the Earth’s biophysical limits more than 100 times over.

It has long been recognized that the chemical industry must move away from using fossil raw materials. But now, this study has, for the first time, quantified the problem at a global scale. “The message is clear: we can and must act now,” Guillén Gosálbez says.

In the advisory meetings the ETH professor holds with chemical companies, practically all of them show a willingness to make their production more environmentally friendly—for economic reasons, too: “Sustainability has become a global trend and a topic that more and more customers are paying attention to,” Guillén Gosálbez says.

Bringing about a fundamental change to production processes is ultimately a question of cost. “It’s essential for companies to know in advance how much changes in a particular production step will increase the sustainability of their product,” Guillén Gosálbez explains. To date, the industry has had hardly any applications with which to perform such an absolute sustainability assessment.

This is why the researchers would like to further develop their method so that it can be used not only to evaluate existing production processes but also to optimize the potential of new approaches. “Ideally, this will allow us to find the best—which is to say the most resource-efficient—mix of the different production technologies for a chemical,” Pérez-Ramírez says.

Citation:
How the production of chem­ic­als is in­ter­fer­ing with nature calculated in absolute figures (2022, February 1)