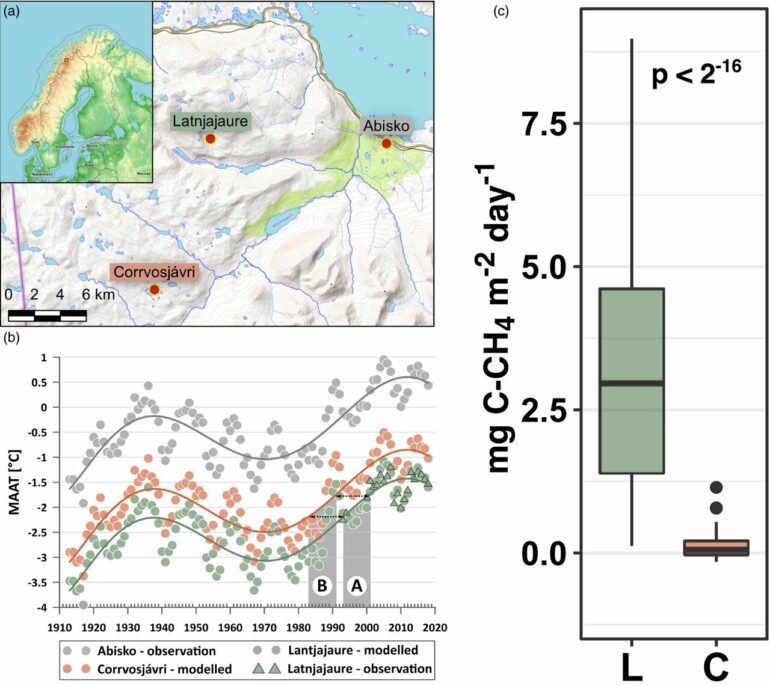 Thawing permafrost in the Arctic does not always have to lead to increased emissions of the greenhouse gas methane. When thawed soil dries up, emissions can decline instead. A new study at the University of Gothenburg demonstrates this.

Warmer climates thaw permafrost in Arctic areas, which can create very large emissions of carbon in the form of methane gas, among other things.

“Much of our knowledge about methane emissions when permafrost thaws comes from carbon-rich areas in the Arctic that generate large greenhouse gas emissions,” says Mats Björkman, a researcher at the Department of Earth Sciences. “Our study, on the other hand, was done in mineral-rich soils near Abisko in northern Sweden. There we saw a tenfold reduction in methane emissions when we compared areas where thawing occurred 15 to 25 years ago.”

The researchers noted that when the permafrost disappeared the surface layer of the soil became drier. As a result, conditions that allow the production of methane change.

“When the ice cap of the permafrost in the ground disappears, it is like draining a bathtub. The soil water drains into the ground water and the surface layers of soil dry up,” says Björkman.

The amount of methane emitted from the ground depends on two microbial processes. On the one hand, the production of methane requires oxygen-poor, preferably wet environments. On the other hand, oxygen-rich environments, such as those near the surface of the soil, consume methane. That means a relatively small change in soil moisture in the top centimeters can affect emissions and even result in methane being absorbed from the atmosphere.

The research study also shows that vegetation changes after a few years without permafrost in the soil, which can play a role in methane emissions.

Importance of a comprehensive picture of the Arctic

Most studies on carbon emissions in the Arctic have taken place in areas with deep permafrost. This produces a different result than when ice melts in thinner soil layers and completely disappears, as is the case in Swedish alpine areas, which also contain less carbon.

“Our research shows that emissions from areas where permafrost thaws are not the same everywhere. The observations represent an important component of a more comprehensive picture of the climate impact in the Arctic. Our results also underscore the importance of including hydrological, vegetation, and microbial changes when studying the long-term effects of permafrost thawing and disappearing.”

In the future Mats Björkman wants to determine which areas will either get wetter or drier and see how they are affected when the permafrost thaws. He also points out that his findings do not alter humanity’s impact on climate change.

“The best way to curb the greenhouse effect is still for humanity to reduce its greenhouse gas emissions.”

Climate change in the Arctic is expected to cause emissions of up to 250 gigatons of carbon by 2100 due to the thawing permafrost. Much of the knowledge about the processes that release hydrocarbons comes from carbon-rich areas of the Arctic. Few studies have previously been done on how these processes affect Arctic mineral-rich soils, which make up about 87% of the entire land mass in the north.

To gain an insight into how vegetation, soil, and microorganisms have been affected by the disappearance of permafrost, Björkman’s research team studied two sites with mineral-rich soils in the Abisko Mountains where permafrost disappeared during the 1980s and 1990s.