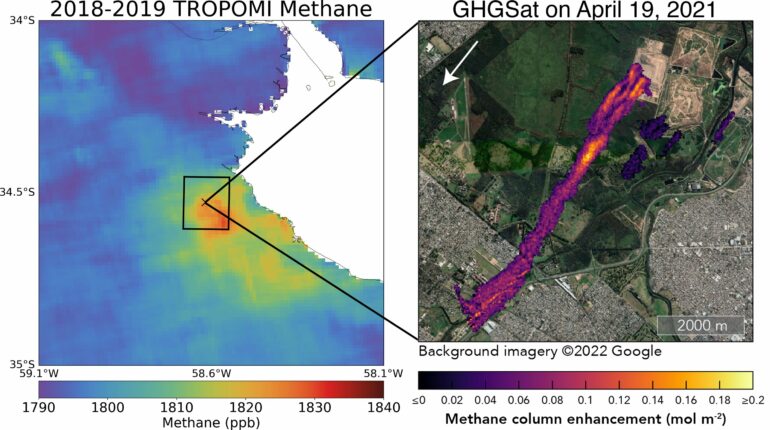 Methane is almost thirty times more powerful as a greenhouse gas than CO2. Researchers from SRON Netherlands Institute for Space Research therefore scan the entire globe for large methane leaks. A landfill in Buenos Aires turns out to emit tens of tons of methane per hour, comparable to the climate impact of one and a half million cars. They also detect large emissions from landfills in India and Pakistan, identifying new low-hanging fruit in the battle against climate change. The work was published on August 10 in Science Advances.

Methane is the second largest anthropogenic contributor to the greenhouse effect, after CO2. This is due to its large global warming potential over 100 years (GWP-100). Methane is almost 30 times more potent per ton as a greenhouse gas than CO2. When methane is released through human activity—by oil installations, coal mines, cattle sheds or landfills—it can be made less harmful by flaring it and thereby converting it to CO2. Even better, if you capture it, you can put it to good use in boilers or stoves. Researchers from SRON Netherlands Institute for Space Research have now used satellite data to locate a number of landfills that are low-hanging fruit in the fight against climate change. Four landfills in Argentina, India and Pakistan emit several or even tens of tons of methane per hour.

The SRON methane research team used the Dutch space instrument Tropomi to identify cities with high methane emissions. Buenos Aires, Delhi, Lahore and Mumbai stood out, with urban emissions on average twice as high as estimated in global inventories. Next, the team asked the Canadian satellite GHGSat to zoom in, which revealed that landfills are responsible for a large fraction of emissions in these cities. The landfill in Buenos Aires emits 28 tons of methane per hour, comparable to the climate impact of 1.5 million cars. The three other landfills are responsible for, respectively, three, six and 10 tons of methane per hour, which still amounts to the impact of 130,000 to 500,000 cars.

“Methane is odorless and colorless, so leaks are notoriously difficult to detect,” says lead author Bram Maasakkers (SRON). “But satellites are ideally suited for this. With Tropomi, we detect super-emitters that pump large amounts of methane into the atmosphere. That is painful to watch because you can solve it with relatively little effort. You could, for example, separate and compost the organic waste, which would drastically reduce methane production. And even in the case of mixed waste, you can still collect or flare the methane produced. Methane has a lifetime of only about 10 years in the atmosphere, so if we act now, we will quickly see results in the form of less global warming. Of course, reducing methane emissions is not enough, we also need to limit CO2, but it does slow down near-term climate change.”