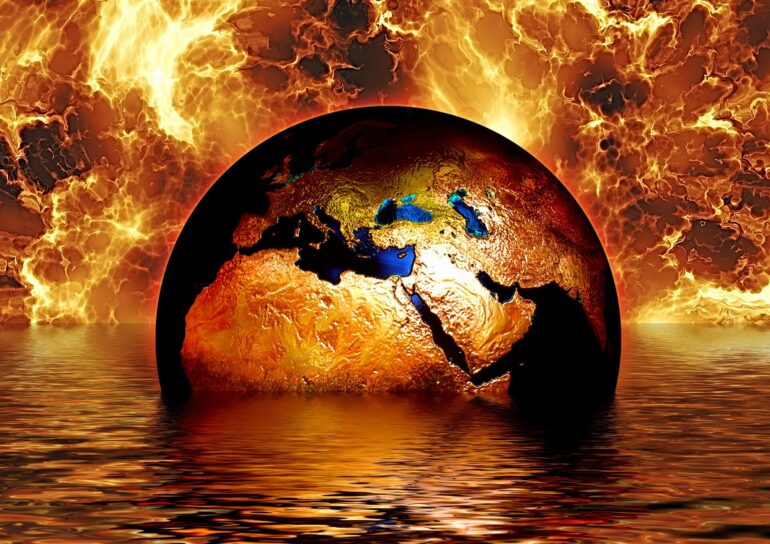 A new tool developed by European and Australian scientists enabling unparalleled modeling of interconnected species loss shows cascading extinctions are unavoidable, and that the Earth will lose some 10% of its animals and plants by 2050, rising to 27% by 2100.

The findings are published in the journal Science Advances.

Using one of Europe’s most-powerful supercomputers, European Commission scientist Dr. Giovanni Strona also of the University of Helsinki and Professor Corey Bradshaw of Flinders University used the tool to create synthetic Earths complete with virtual species and more than 15,000 food webs to predict the interconnected fate of species that will likely disappear from the ravages of climate and land-use changes.

The tool presents a grim prediction of the future of global diversity, confirming beyond doubt that the world is in the throes of its 6th mass extinction event.

The two scientists say past approaches to assessing extinction trajectories over the coming century have been stymied by not incorporating co-extinctions—that is, species that go extinct because other species on which they depend succumb to climate change and/or changes to the landscape.

“Think of a predatory species that loses its prey to climate change. The loss of the prey species is a ‘primary extinction’ because it succumbed directly to a disturbance. But with nothing to eat, its predator will also go extinct (a ‘co-extinction’). Or, imagine a parasite losing its host to deforestation, or a flowering plant losing its pollinators because it becomes too warm. Every species depends on others in some way,” says Professor Bradshaw.

Until now, researchers have not been able to interconnect species at a global scale to estimate how much additional loss will occur through co-extinctions. While there are many excellent analyses examining distinct aspects of extinctions, such as the direct effects of climate change and habitat loss on species’ fates, these aspects are not necessarily stitched together realistically to be able to predict the scale of extinction cascades.

Strona’s and Bradshaw’s solution to this problem was to build a massive virtual Earth of interconnected species networks linked by who eats whom, and then apply climate and land-use changes to the system to inform future projections.

The virtual species could also recolonize new regions as the climate changed, could adapt to some extent to changing conditions, could go extinct directly from global change, or could fall victim to an extinction cascade.

“Essentially, we have populated a virtual world from the ground up and mapped the resulting fate of thousands of species across the globe to determine the likelihood of real-world tipping points,” explains Dr. Strona.

“We can then assess adaptation to different climate scenarios and interlink with other factors to predict a pattern of coextinctions.

“By running many simulations over three main scenarios of climate until 2050 and 2100—the so-called Shared Socioeconomic Pathways (SSP) from the Intergovernmental Panel on Climate Change (IPCC), we show that there will be up to 34% more co-extinctions overall by 2100 than are predicted from direct effects alone,” Dr. Strona says.

Professor Bradshaw says even more frightening is that co-extinctions will raise the total extinction rate of the most vulnerable species by up to 184% by the end of the century.

“This study is unique, because it accounts also for the secondary effect on biodiversity, estimating the effect of species going extinct in local food webs beyond direct effects. The results demonstrate that interlinkages within food webs worsen biodiversity loss, to a predicted rate of up to 184% for the most susceptible species over the next 75 years.

“Compared with traditional approaches to predicting extinctions, our model provides a detailed insight into variation in patterns of species diversity responding to the interplay of climate, land use, and ecological interactions. Children born today who live into their 70s can expect to witness the disappearance of literally thousands of plant and animal species, from the tiny orchids and the smallest insects, to iconic animals such as the elephant and the koala … all in one human lifetime,” Professor Bradshaw says.

“The model produces realistically structured networks and a plausible regional distribution of species body masses, mirroring real-world evidence and validating our approach. We assessed the effects of simulated climate and land use from 2010 to 2100 monthly for species extinction, leaving no doubt that in all scenarios climate change is directly responsible most primary and co-extinctions,” says Dr. Strona.

Professor Bradshaw says despite a general appreciation that climate change is now a major driver of extinctions globally, the new analysis demonstrates clearly that we have so far underestimated its true impacts on the diversity of life on Earth. Without major changes in human society, we stand to lose much of what sustains life on our planet.


Citation:
Model shows extinction cascades caused by land use and climate change will wipe out more than 25% of world biodiversity (2022, December 16)