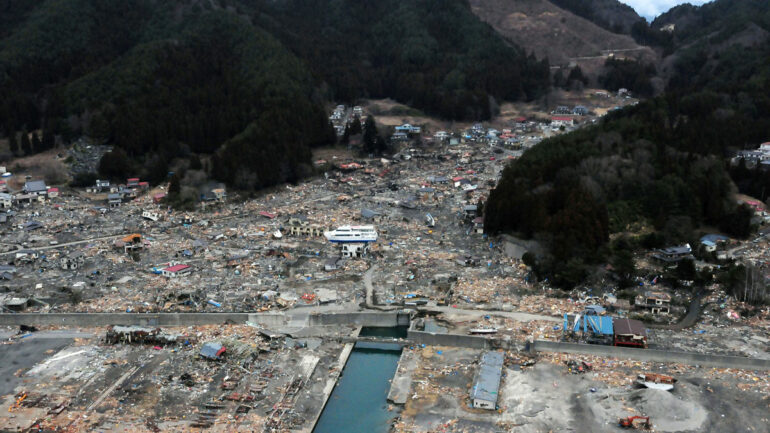 Constant monitoring of faulted regions with seismographs and space geodesy measurements can indicate when land deformations are occurring in shallow or surficial systems, giving researchers a hand with hazard mitigation work. But for subduction zones, much of the deformation occurs deep within Earth, making it difficult to detect on the surface.

In a new paper, Panet et al. investigate whether they could detect pulling slab deformations using gravity measurements from satellites. The team used Gravity Recovery and Climate Experiment (GRACE) satellite data—GRACE is a twin satellite system launched by NASA and DLR (German Aerospace Center) that makes detailed measurements of Earth’s gravity field. These measurements can reveal information about changes in Earth systems, including amounts and locations of water and ice as well as crustal deformations.

In previous studies, the team identified and mapped anomalous variations in Earth’s gravity in the months preceding the Tōhoku earthquake in both space and time. In this paper, the researchers developed a new way to detect signals along plate boundaries.

The researchers used GRACE to study subtle changes in gravity in subduction systems. Using overlapping passes of GRACE gravity gradients from 2004 to 2011, the team tested whether they could see deep signals in the solid Earth before Tōhoku occurred, and created a method to identify solid mass redistributions based on the variation of gravity gradients.