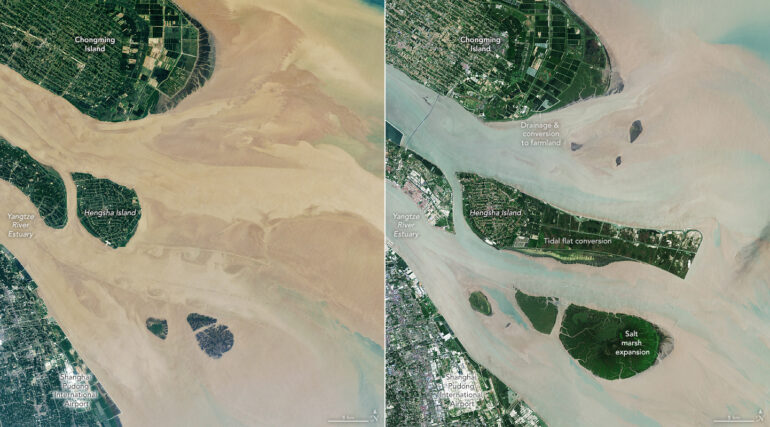 According to a new NASA-led study, the world has lost 561 square miles (1,453 square kilometers) of salt marshes over the past 20 years. In a recent research paper published in the journal Nature, scientists described the first consistent global accounting of salt marsh locations and changes. The work also allowed them to start estimating the amount of carbon dioxide—a greenhouse gas—emitted into the atmosphere as marshland is degraded or lost.

Salt marshes are coastal grasslands that are regularly flooded by salty seawater, and they are both an indicator of and protector against climate change. They buffer coastal communities from severe storm impacts and rising sea levels. They provide vital habitat and nurseries for coastal plant, animal, and bird species, and recreation areas for humans. Furthermore, marshes sequester carbon in their vegetation, peaty muds, and other organic debris.

“Salt marshes store a significant amount of carbon, and as that carbon is emitted into the atmosphere due to wetland degradation, it propels climate change forward,” said Anthony Campbell, the study’s lead author and an assistant scientist in NASA’s Postdoctoral Program Fellowship. “Prior to this, we didn’t have maps of how and where marshes are changing. This study gives us an idea of how much carbon was emitted in the past 20 years.”

While a few areas of the world gained marshland over the past two decades, the scientists recorded an overall global loss equivalent to two soccer fields every hour—a significant loss, though less than some previous estimates based on ground-based sampling from limited sites. The United States and Russia accounted for 64% of the total marsh losses over the span of the study period.

For the study, NASA scientists conducted a global and systematic change analysis of satellite images collected from 2000 to 2019, quantifying losses, gains, and recoveries of salt marsh ecosystems. Analyzing data from Landsat 5, 7, and 8 in Google Earth Engine, scientists identified marsh change and change drivers, including storm events, urbanization, and local sea-level change. These global salt marsh change data are now openly available. (Landsat is a joint mission of NASA and the U.S. Geological Survey.)

After analyzing changes to the shape and area of marshes, Campbell and colleagues synthesized global estimates of the organic carbon stored aboveground (in biomass such as grasses and shrubs) and buried in marsh soils and sediments. They then derived how much carbon was released through the loss of marshland. They estimated net global emissions of 16.3 Terragrams of carbon dioxide across the study period, an annual equivalent of emissions from approximately 3.5 million motor vehicles.

Historically, salt marshes were not considered important ecosystems for carbon storage and emissions, so there weren’t as many efforts to track them, said Lola Fatoyinbo, a marshland and mangrove researcher at NASA’s Goddard Space Flight Center in Greenbelt, Maryland. But in fact, such “blue carbon”—organic carbon stored in coastal and marine ecosystems like marshes and mangroves—are an important part of Earth’s carbon budget. Fatoyinbo noted that the inclusion of blue carbon ecosystems in international policymaking will be critical for achieving the climate targets in the Paris Agreements’ Nationally Determined Contribution (NDC).

Around the world, wetlands and marshes are changing due to many climate-related drivers and coastal development—everything from sea level rise and storm events to disrupted sediment supplies and drought.

“Salt marshes are really important coastal ecosystems, and their losses can lead to high emissions of carbon dioxide, methane, and other greenhouse gases from the soil into the atmosphere,” Fatoyinbo said. “The protection and restoration of blue carbon ecosystems are ways for countries to achieve their NDC. The new global map of wetland losses and gains could help countries better direct the management, protection, and restoration of these ecosystems.”