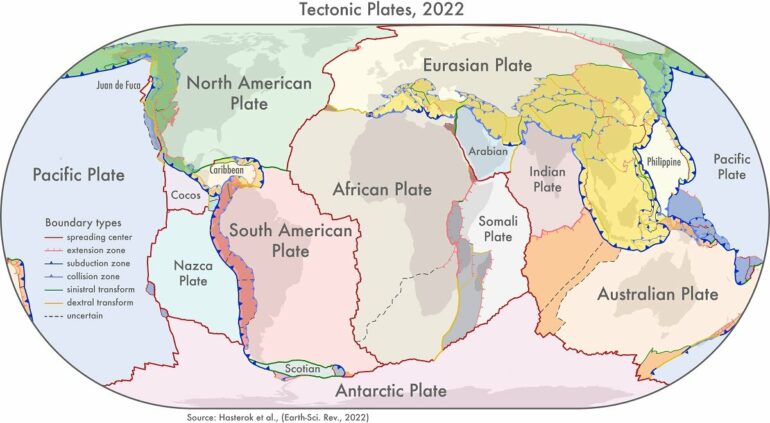 New models that show how the continents were assembled are providing fresh insights into the history of the Earth and will help provide a better understanding of natural hazards like earthquakes and volcanoes.

“We looked at the current knowledge of the configuration of plate boundary zones and the past construction of the continental crust,” said Dr. Derrick Hasterok, Lecturer, Department of Earth Sciences, University of Adelaide who led the team that produced the new models.

“The continents were assembled a few pieces at a time, a bit like a jigsaw, but each time the puzzle was finished it was cut up and reorganized to produce a new picture. Our study helps illuminate the various components so geologists can piece together the previous images.

“We found that plate boundary zones account for nearly 16% of the Earth’s crust and an even higher proportion, 27%, of continents.”

“There are 26 orogenies—the process of mountain formation—that have left an imprint on the present-day architecture of the crust. Many of these, but not all, are related to the formation of supercontinents,” said Dr. Hasterok.

“Our work allows us to update maps of tectonic plates and the formation of continents that are found in classroom textbooks. These plate models which have been assembled from topographic models and global seismicity, have not been updated since 2003.”

The new plate model includes several new microplates including the Macquarie microplate which sits south of Tasmania and the Capricorn microplate that separates the Indian and Australian plates.

“To further enrich the model, we added more accurate information about the boundaries of deformation zones: previous models showed these as discrete areas rather than wide zones,” said Dr. Hasterok.

“The biggest changes to the plate model have been in western North America, which often has the boundary with the Pacific Plate drawn as the San Andreas and Queen Charlotte Faults. But the newly delineated boundary is much wider, approximately 1,500 km, than the previously drawn narrow zone.

“The other large change is in central Asia. The new model now includes all the deformation zones north of India as the plate bulldozes its way into Eurasia.”

Published in the journal Earth-Science Reviews, the team’s work provides a more accurate representation of the Earth’s architecture and has other important applications.

New map shows where fracking-induced earthquakes could hit in Canada

“Our new model for tectonic plates better explains the spatial distribution of 90% of earthquakes and 80% of volcanoes from the past two million years whereas existing models only capture 65% of earthquakes,” said Dr. Hasterok.