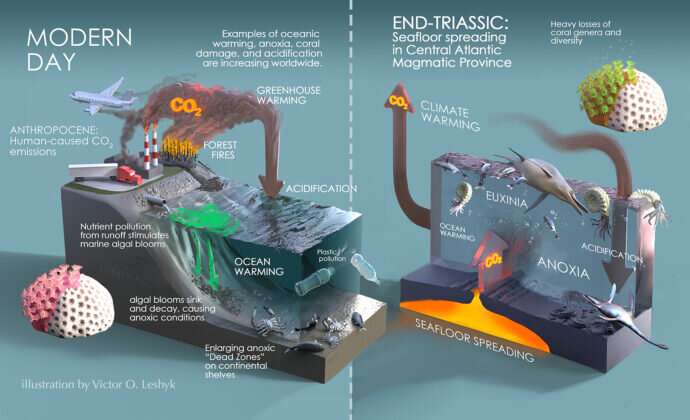 Curtin-led research has revealed an increase in levels of both acid and hydrogen sulfide in the ocean was the double whammy that wiped out marine life during a mass extinction event 201 million years ago.

Lead author, Curtin Ph.D. graduate Dr. Calum Peter Fox, from the WA-Organic and Isotope Geochemistry Centre (WA-OIGC) in Curtin’s School of Earth and Planetary Sciences, said the research revealed the twin processes that combined to the end the Triassic era, paving the way for the emergence of dinosaurs in the Jurassic period.

“The end-Triassic event saw rapid increases in CO2 due to a surge in volcanic activity, which is understood to have caused unfavorable conditions for life resulting in mass extinction, however the multiple drivers for loss of life during this period were not previously known,” Dr. Fox said.

“By studying microscopic fossils preserved in rock in the Bristol Channel Basin, in the southwestern United Kingdom, we identified the twin mechanisms responsible for the mass extinction.

“These were a deadly combination of ocean acidification, which inhibited growth of all marine life using calcium carbonate to create shells or body parts such as mussels, oysters, and corals, and rising levels of hydrogen sulfide in the ocean, which was extremely toxic for all marine life.”

Co-author John Curtin Distinguished Professor Kliti Grice, also from WA-OIGC in Curtin’s School of Earth and Planetary Sciences, said the research provided intricate and important details of the history of our ever-evolving planet.

“The revelations about the cause of past marine extinctions will help us understand the current global warming crisis and how we can protect our deteriorating ecosystems and environment,” Professor Grice said.

“In order to help understand how our environment and ecosystems may change during this event, we must investigate those in the past.

“There is still much to learn about mass extinction events and studying these disruptive time intervals further will inform us more about the history of our Earth, but also what climatic changes we can expect moving forward as CO2 levels continue to increase.”

This research, led by Curtin University and funded by the ARC, was conducted in collaboration with researchers at the University of Southampton, Lahmont-Doherty Earth Observatory, MIT, and Oxford University. Dr. Fox did the research as part of his Ph.D. studies at Curtin and is now at Khalifa University.

Planet-scale MRI: High resolution illumination of Earth’s interior down to the planet’s core

The study, “Two-pronged kill mechanism at the end-Triassic mass extinction,” was published in Geology.