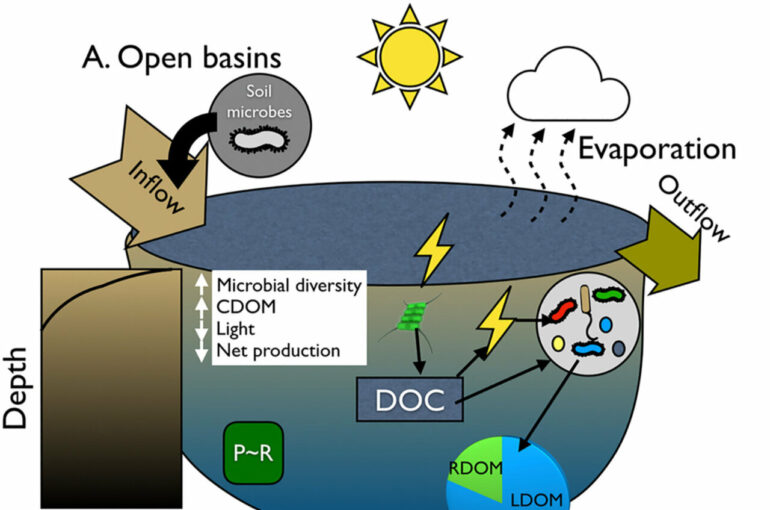 When we burn fossil fuels, it not only produces carbon dioxide, a driver of climate change, but it also consumes the oxygen we breathe. However, the amount of oxygen in our atmosphere produced by plants is nearly balanced by the amount consumed by animals, keeping it at around 21% of the atmosphere. This raises a big question relevant to our survival and the future of biodiversity: what keeps the levels of oxygen in our atmosphere relatively constant?

Oxygen helps break down organic matter to release carbon dioxide—a process you can see in a backyard compost pile. Yet in some places on Earth, organic matter such as plant debris can persist for thousands of years despite the presence of abundant oxygen. College of Biological Sciences professor James Cotner wants to better understand why this occurs and its implications for carbon sequestration and climate change.

In a recent study published in the journal Limnology and Oceanography Letters, Dr. Cotner and co-authors N.J. Anderson and Christopher Osburn sampled lakes in Greenland where dissolved organic compounds can accumulate to concentrations that are 200 times greater than concentrations in the oceans. Some of these lakes sit right next to lakes with much lower concentrations, and they wanted to understand why organic matter is preserved in some lakes but not others. They measured the salinity of the lakes to determine how connected the lakes were to their watersheds and used radiocarbon dating to measure the age of the organic matter. “Our work seems to suggest that hydrology and sunlight can have a big effect on sequestration.” says Cotner.

The researchers found that:

Less salty lakes that were well-connected to surrounding watersheds degraded organic matter much more quickly than lakes that were somewhat isolated, i.e., more salty. Exposure to sunlight and the production of metabolites by microbes when they are starved for nutrients likely facilitate organic matter accumulation in the less-connected lakes.Hydrology is a key part of the carbon cycle on Earth’s surface, and both natural and human-driven processes like agriculture impact hydrologic connectivity with implications for both the carbon cycle and oxygen in our atmosphere. “We were somewhat shocked to find that the age of the dissolved organic matter correlated extremely well with the salinity of the lake water, suggesting that very old organic matter can persist in lakes that are not well-connected to their surrounding landscapes.” said John Anderson, a co-author from Loughborough University.

Further research in this area could reveal more about how carbon sequestration occurs in nature, which could have implications for human efforts at carbon sequestration as well. “Our future work will be focusing on the importance of tannins, humic compounds and nutrients as well as the role of different soil microbes to the degradation of organic matter in freshwater,” says Cotner.