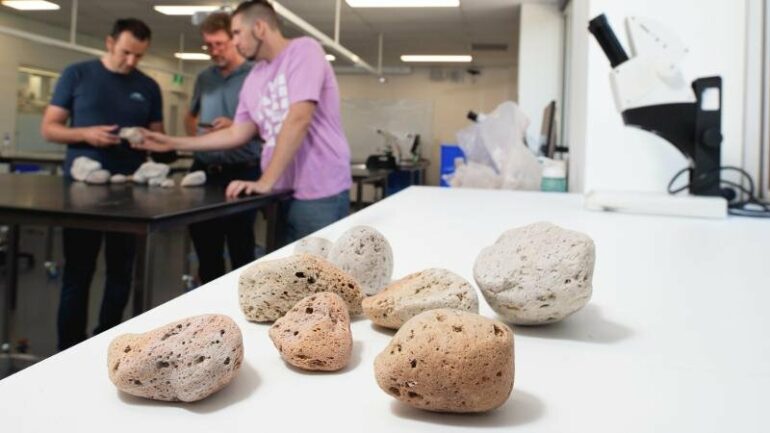 The presence of pink pumice in the giant pumice raft of the 2012 Havre eruption that drifted across the southwest Pacific Ocean has led researchers to recognize the immense power of underwater volcanic eruptions.

In research published in the Nature portfolio journal Communications Earth and Environment, the researchers, including Professor Scott Bryan, Dr. Michael Jones and Ph.D. candidate Joseph Knafelc were intrigued by the occurrence of pink pumice within the massive pumice raft that resulted from the Havre 2012 deep-sea eruption.

The publication of the new research comes after the recent dramatic explosion of the Hunga Tonga Hunga Ha’apai volcano in Tonga, about 1200 km north of the Havre volcano, which has sharply brought the world’s attention to the explosive potential and hazards associated with submarine eruptions.

Professor Bryan, who has been studying pumice rafts for more than 20 years, said the pink pumice produced in the 2012 Havre eruption revealed insights into how magma can shoot out and up from underwater volcanoes.

“Unlike Hunga Tonga-Hunga Ha’apai, Havre is in a much more remote location. Its summit is 900m below sea level, and the nearest populated areas are around 800km away on the North Island of New Zealand,” Professor Bryan said.

When the volcano erupted in 2012, there was no one to see it happen. But the color of the pumice tells the story of what happened.

“The common theory is that underwater eruptions, particularly in deep water such as at Havre, cannot be explosive and instead make lava flows on the seafloor,” Mr Knafelc said.

“But few submarine eruptions have been able to be observed, and past studies had failed to consider the existence of the pink pumice in the pumice raft.

“The color in this case is critical—the pink to red color tells us the pumice had to be ejected into the air at temperatures above 700 °C for tiny iron minerals to then oxidize and cause the reddening.

“The problem is that it was an underwater eruption that had to push up through nearly 1 km of ocean. The only way it can do this is if the eruption was very powerful and able to punch through the ocean water and produce an eruption column in the air.”

The research details how the core of the eruption was a powerful jet and able to be shielded from the surrounding water.

“The pink pumice and its thermal history tell us that the core of the eruption column was untouched by the cooling effects of the ocean water,” Professor Bryan said.

“An explosive eruption column could get hot pumice into the atmosphere in as little as a few seconds.

“As a timely reminder, we recently witnessed in Tonga the power of—and devastation and impact from—explosive submarine eruptions, the effects of which could be detected around the world.”

The research team included Professor Andrew Berry and Dr. Guil Mallman from the Australian National University, Professor David Gust and Dr. Henrietta Cathey from QUT, Dr. Eric Ferré, from the University of Louisiana at Lafayette, and Daryl Howard from the Australian Synchrotron. QUT researchers are from the QUT Earth and Atmospheric School and the Central Analytical Research Facility (CARF).


Citation:
Pink pumice is a key to revealing the explosive power of underwater volcanic eruptions (2022, February 8)