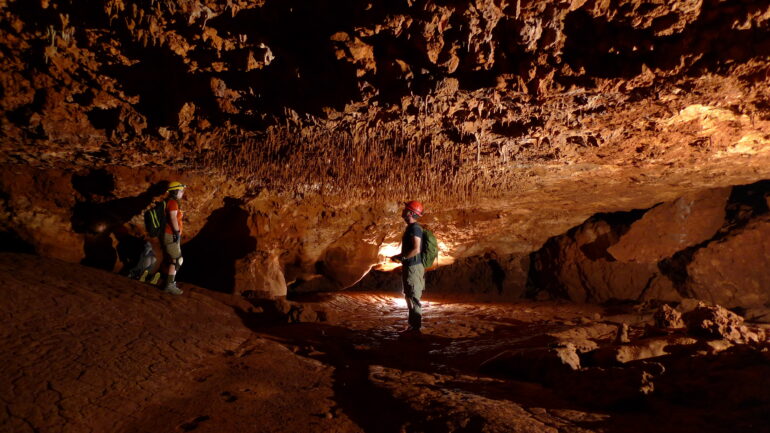 A team of scientists, including those from Woods Hole Oceanographic Institution (WHOI), have combined stalagmites and climate model simulations to reveal links between monsoon rains and tropical cyclones in Australia.

This work was published January 11 in the journal Science Advances.

“That didn’t make any sense to me at first because what happens in the tropics with the monsoon should be distinct from what happens with cyclone activity in the subtropics,” Denniston said. “The only thing I could think of that would connect the two is the ITCZ.”

The ITCZ, or Intertropical Convergence Zone, is a belt of rising air that forms the center of monsoon rainfall in tropical regions around the world. The ITCZ roughly parallels the equator and migrates back and forth between the northern and southern hemispheres, tracking summer heating of the Earth’s surface.

“We compared the tropical cyclone tracks during years that had the ITCZ in a more southerly position with those years when it was located further north,” Ummenhofer added. “We were struck by how different both surface ocean temperatures and actual hurricane tracks over the Indian Ocean were during these two sets of years. A more southerly ITCZ position meant warmer ocean temperatures and more cyclones near the cave site in northwestern Australia–and hence making landfall further south in Western Australia.”

“There’s a lot of atmospheric disturbance in the ITCZ, and as a result, a lot of tropical cyclones form there,” Denniston continued. “The connection we made was that while the ITCZ moves into the southern hemispheres at the start of the austral summer each December, it doesn’t always park itself in the exact same place.

“When you look at it over hundreds and thousands of years, like we did using our stalagmite records, larger scale patterns are evident; some years the ITCZ stays closer to the equator and when it does, the Australian tropics receive less monsoon rainfall. Other times the ITCZ migrates much further south, increasing monsoon rainfall across tropical regions. We wondered if in those years when the ITCZ was further south if cyclones were forming further south as well, causing more of them to pass over the subtropics, delivering more rain there.”

To test this hypothesis, the team partnered with experts in the study of the ITCZ–Dr. Francesco Pausata and his graduate student, Roberto Ingrosso, of the University of Quebec. They examined climate data based both on observations and a climate model simulation of the last millennium to identify years when the southern hemisphere ITCZ was positioned either particularly far north or south. Next, Dr. Caroline Ummenhofer of the Woods Hole Oceanographic Institution compared tropical cyclone tracks over Australia during recent years.

And finally, MIT Professor Kerry Emanuel applied a cutting-edge simulation of hurricanes to the observational and climate model data to test how changes in the location of the ITCZ impacted tropical cyclone rainfall over the Australian subtropics.

How is your research different?

“Our study is unique in its ability to demonstrate how closely tied monsoons and tropical cyclones are to the ITCZ over long periods of time. The whole system is so noisy that we can’t make a lot of sense of it over the short record (about 40 years) of direct observations and measurements,” Denniston said.

“However, by combining stalagmite records and climate model simulations, we can see how things operate over much longer time periods. What is revealed is that cyclones and monsoons varied in tandem at a really fine scale.”

What does this mean for climate change?

“A really important question in climate science involves the so-called ‘widening of the tropics,’ in which dry air is expanding toward higher latitudes across the subtropics. The southern portions of Australia, where most Australians live and where most of their farmland is located, appear to be particularly at risk of suffering increased droughts due to this phenomenon,” Denniston said.

“One possible conclusion of our work is that the same shifts in climate that are causing central and southern Australia to become drier may also lead to more frequent rainfall events from cyclones. Australia is a drought-sensitive country and has suffered massive and extended droughts numerous times over the last 120 years. As this region’s climate is already teetering on the edge, continued drying could spell major problems for agriculture, society, and the environment. However, more regular big rainfall events from tropical cyclones could potentially help offset some of the long-term drying.”

What does this mean for the future?

“This work is an illustration of how the climate system is composed of lots of interlocking pieces. Changes in the ocean and atmospheric temperatures can influence the location of the ITCZ, which in turn influences the monsoon rains in the Australian tropics and the rains derived from tropical cyclones in the much drier regions further south,” Denniston said.

“Our study also shows the power of combining geologic records of past climate with climate model simulations. We really need to understand all the pieces of the puzzle to prepare for the climate changes that are coming, and this approach is a great way to do it.”