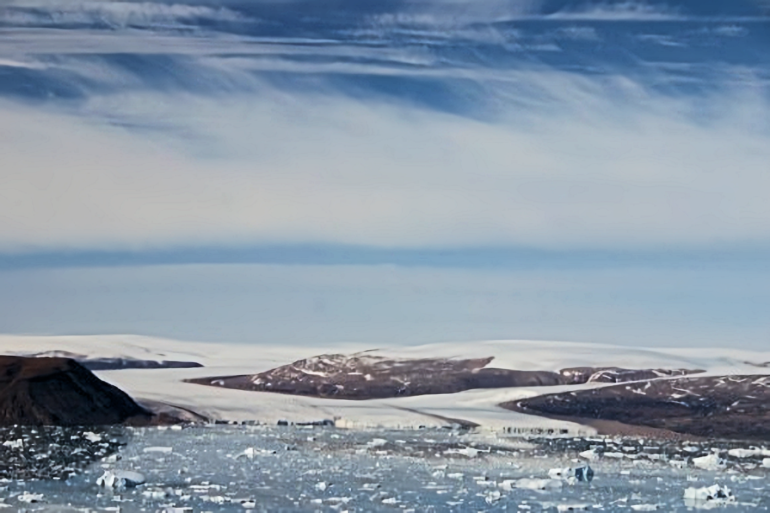 Greenland’s many small glaciers are melting at great speed, and the melting is increasing, especially in the Arctic regions, where the temperature rise is worst.

Now, researchers have studied precisely how much mass these glaciers—not connected to the ice sheet—have lost in recent decades.

In the Arctic, temperatures are rising more than in the rest of the world, and this is causing the northernmost glaciers in Greenland to melt at record speed. This is shown in a new study by researchers led by DTU Space in collaboration with Geological Survey of Denmark and Greenland (GEUS), NASA Goddard Space Flight Center, Utrecht University, University of Bristol, Technical University Munich, and the University of Copenhagen.

The study focuses on smaller glaciers with no connection to the Greenland Ice Sheet. These peripheral glaciers make up only about four percent of Greenland’s ice-covered areas, corresponding to approximately the same area as Ireland (72,000 km2), but they contribute as much as 11 percent of the total loss of ice from Greenland’s ice-covered areas. Thus, they are a major contributor to global sea level rise.

“The loss of ice from these small glaciers occurs because they are more sensitive to ongoing temperature changes and therefore melt faster than we see in many other places in the Arctic,” said Professor Shfaqat Abbas Khan from DTU Space, lead author of the paper published in Geophysical Research Letters.

The new study shows that the melting of the peripheral glaciers has increased dramatically over the past two decades. On average, 42.3 gigatons of ice melted per year from October 2018 to December 2021. In comparison, “only” 27.2 gigatons melted annually in the period February 2003 to October 2009.

“We can see that there is a marked increase in the melting of the glaciers in northern Greenland. This shows that the ice masses in Greenland are very unstable and that they make a considerable contribution to the global sea level rise,” said Professor Khan.

“It is disturbing, but to be expected, that the northernmost ice sheet on the planet is hit hard by the ongoing temperature rises, because it is evident that the temperature here has also risen the most in the last 20 years.”

The changes have been recorded using altimetry (altitude measurements) with the American satellites ICESat and ICESat-2.

Although the isolated glaciers are not part of the Greenland Ice Sheet, it is important to include them in the total melt budget from the Arctic in order to calculate exactly how much the region contributes to sea level rise.

Thus, it is important to keep track of all sources, especially because there are large variations in the melting patterns in different parts of Greenland, said Senior Researcher and co-author, William Colgan from the National Geological Survey of Denmark and Greenland (GEUS).

“It was quite a surprise to see how much the melting of glaciers in the far north of Greenland has accelerated in recent years and this is yet another indicator of dramatic changes that are taking place across the Arctic,” said co-author Jonathan Bamber, Professor of Glaciology at the University of Bristol Cabot Institute for the Environment.

In Greenland, there are many glaciers that are not connected to the Greenland Ice Sheet itself. They are called peripheral glaciers and it is estimated that there are 20,300 of them (minimum area of 0.05 km2). They are found from the southernmost to the northernmost Greenland and range from large ice caps to small cirque glaciers, which are glaciers delimited to a depression in the terrain. All these glaciers have their own mass balance, just as the Greenland Ice Sheet has, i.e. the ratio between melting in summer and snowfall in winter. If the mass loss (melting) is greater than the mass supply (snowfall), the glacier becomes smaller, and vice versa. Compared to the Greenland Ice Sheet, there is relatively little research on the peripheral glaciers.