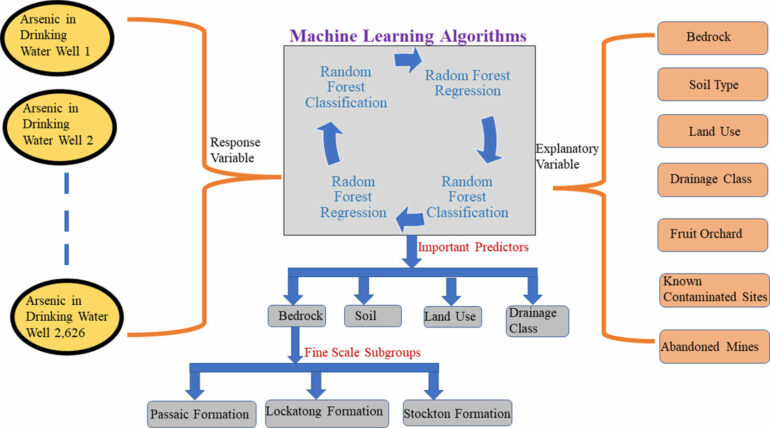 Despite the risks to human health, testing for arsenic isn’t required for most private drinking wells in New Jersey. To help address this regulatory gap, a Rutgers researcher developed a machine learning model that can estimate arsenic contamination in private wells without the need to sample the water itself.

“New Jersey has many naturally occurring arsenic sources, which can elevate the arsenic concentration in groundwater,” said Subhasis Giri, an assistant research professor in the Department of Ecology, Evolution and Natural Resources and lead author of the study published in the journal Science of the Total Environment. “Our work contributes to the understanding of this human health risk by revealing the sources of arsenic concentration in private drinking water wells, which will in turn help with mitigation.”

Arsenic occurs in both organic and inorganic forms. Natural sources are rocks, soils and water, while anthropogenic sources include pesticides, wood preservatives, mining and the smelting of arsenic-containing minerals. Long-term exposure to elevated levels of arsenic in drinking water can cause serious health consequences, such as heart disease, diabetes and cancer.

To identify arsenic hotspots in three countries in west-central New Jersey (Hunterdon, Somerset and Morris), Giri and colleagues at Columbia University and the New Jersey Institute of Technology developed a computer model that uses machine learning to predict the likelihood that a private well is contaminated with unsafe arsenic levels.

The first step was to analyze data from 2,626 private wells collected between 2011 and 2019 by Raritan Headwaters, a conservation group that works in the Raritan River watershed. Of these wells, 496 had arsenic concentrations at or above 5 micrograms per liter, the maximum level allowed by the state in public drinking water systems. These data were plotted on a map using well locations.

Next, the researchers developed machine-learning algorithms to determine what contributes to higher arsenic concentrations. Factors included geological bedrock type, soil type, drainage class, land use cover, the presence of orchards, known contamination and abandoned mines within 500-feet of each well.

“We found that the primary source of arsenic is from geology rather than human activities,” Giri said.

For instance, basalt, a common rock type throughout the study area, is made of minerals with high concentrations of arsenic that can leach into groundwater. The second most significant contributor was soil type, followed by land use, he said.

Most public water supplies in the U.S. are regulated under the federal Safe Drinking Water Act, but private wells are often unregulated. In 2001, the New Jersey Private Well Testing Act was introduced, yet it only requires mandatory testing when a property is bought or sold or if the well is used by tenants.

Of the roughly 400,000 private wells in New Jersey, as many as 80 percent are unmonitored for water quality, the researchers found. Giri said computer models such as the ones he developed can help identify areas of higher arsenic risk, giving well owners additional information when planning their testing strategy.