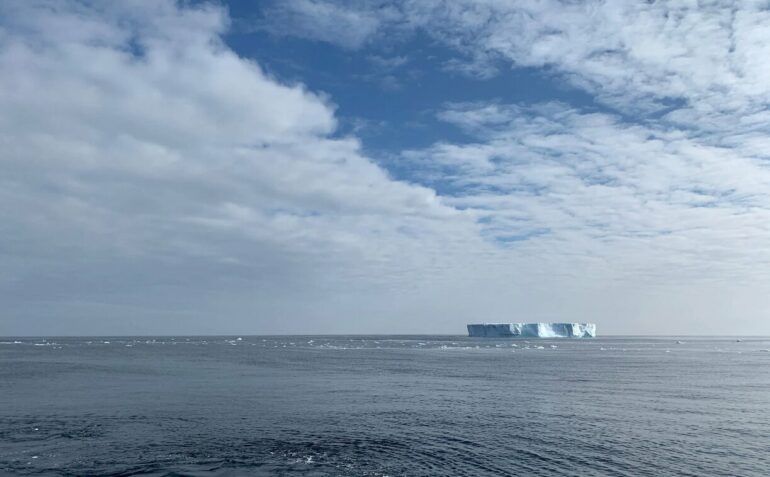 When ice sheets melt, something strange and highly counterintuitive happens to sea levels.

It works basically like a seesaw. In the area close to where theses masses of glacial ice melt, ocean levels fall. Yet thousands of miles away, they actually rise. It largely happens because of the loss of a gravitational pull toward the ice sheet, causing the water to disperse away. The patterns have come to be known as sea level fingerprints since each melting glacier or ice sheet uniquely impacts sea level. Elements of the concept—which lies at the heart of the understanding that global sea levels don’t rise uniformly—have been around for over a century and modern sea level science has been built around it. But there’s long been a hitch to the widely accepted theory. A sea level fingerprint has never definitively been detected by researchers.

A team of scientists—led by Harvard alumna Sophie Coulson and featuring Harvard geophysicist Jerry X. Mitrovica—believe they have detected the first. The findings are described in a new study published Thursday in Science. The work validates almost a century of sea level science and helps solidify confidence in models predicting future sea level rise.

“Ocean level projections, urban and coastal planning—all of it—has been built on the idea of fingerprints,” said Mitrovica, the Frank B. Baird Jr. Professor of Science in the Department of Earth and Planetary Sciences. “That’s why fingerprints are so important. They allow you to estimate what the geometry of the sea level changes is going to be like… so we now have much more confidence in how sea level changes are going to evolve…. If fingerprint physics wasn’t correct, then we’d have to rethink all modern sea level research.”

Sea level fingerprints have been notoriously difficult to detect because of the major fluctuations in ocean levels brought on by changing tides, currents, and winds. What makes it such a conundrum is that researchers are trying to detect millimeter level motions of the water and link them to melting glaciers thousands of miles away.

Mitrovica compared the search to the one for the subatomic particle the Higgs Boson.

“Almost all physicists thought that the Higgs existed, but it was nevertheless a transformative accomplishment when it was firmly detected,” Mitrovica said. “In sea level physics, almost everyone assumed that the fingerprints existed, but they had never been detected at a comparable level of confidence.”

The new study uses newly released satellite data from a European marine monitoring agency that captures over 30 years of observations in the vicinity of the Greenland Ice Sheet and much of the ocean close to the middle of Greenland to capture the seesaw in ocean levels from the fingerprint.

The satellite data caught the eye of Mitrovica and colleague David Sandwell of the Scripps Institute of Oceanography. Typically, satellite records from this region had only extended up to the southern tip of Greenland, but in this new release the data reached ten degrees higher in latitude, allowing them to eyeball a potential hint of the seesaw caused by the fingerprint.

Mitrovica quickly turned to Coulson, a former Ph.D. student in Mitrovica’s lab and now postdoctoral fellow at Los Alamos National Laboratory, to verify if this was truly the fingerprint signal sea level scientists had been chasing for decades.

“She was the best person to … accurately model what the fingerprint would look like given our understanding of how the Greenland Ice Sheet has been losing mass, and she could establish whether that prediction matched the satellite observation,” Mitrovica said.

Coulson, an expert in modeling sea level change and crustal deformation associated with melting of ice sheets and glaciers, was visiting family in the U.K. when the datasets hit her inbox. She immediately recognized the potential, she said.

Coulson quickly collected three decades worth of the best observations she could find on ice height change within the Greenland Ice Sheet as well as reconstructions of glacier height change across the Canadian Arctic and Iceland. She combined these different datasets to create predictions of sea level change in the region from 1993 to 2019, which she then compared with the new satellite data. The fit was perfect. A one-to-one match that showed with more than 99.9% confidence that the pattern of sea level change revealed by the satellites is a fingerprint of the melting ice sheet.

“I was completely amazed, there it was—a sea level fingerprint, proof of their existence,” Coulson said. “This was a really, really exciting moment for all of us. There are very few moments in science which provide such simple, remarkable clarity on complex earth processes.”

“This work, led so remarkably by Sophie, is one of the highlights of my career, a book end to all the theoretical and computational work we’ve built with a community of international colleagues,” added Mitrovica, who’s group was the first to present models and predictions of what sea level fingerprints should look like.

Scientific research usually takes years to develop the results and then get drafted into a paper, but here the researchers were able to act quickly. In total, the process took only a few months from when they saw the satellite data to when they submitted the piece.

That’s because the bulk of the legwork was already done. Much of the theory, technology, and methods had all been well developed already and advanced since Mitrovica and his team presented their work on sea level fingerprints about 20 years ago—computations which were widely accepted and have been factored into almost all models predicting sea level rise.

“This was high risk, high reward science and no-one expected a detection this quickly. We benefited an incredible amount from the groups supporting us, notably the Star-Friedman Challenge,” Mitrovica said.

Now that the first sea level fingerprint has been detected, the question with the biggest global implications is now where does this all leads.

“More detections will come,” Mitrovica said. “Soon the full power of fingerprint physics will be available to project sea level changes into the next decade, century, and beyond.”