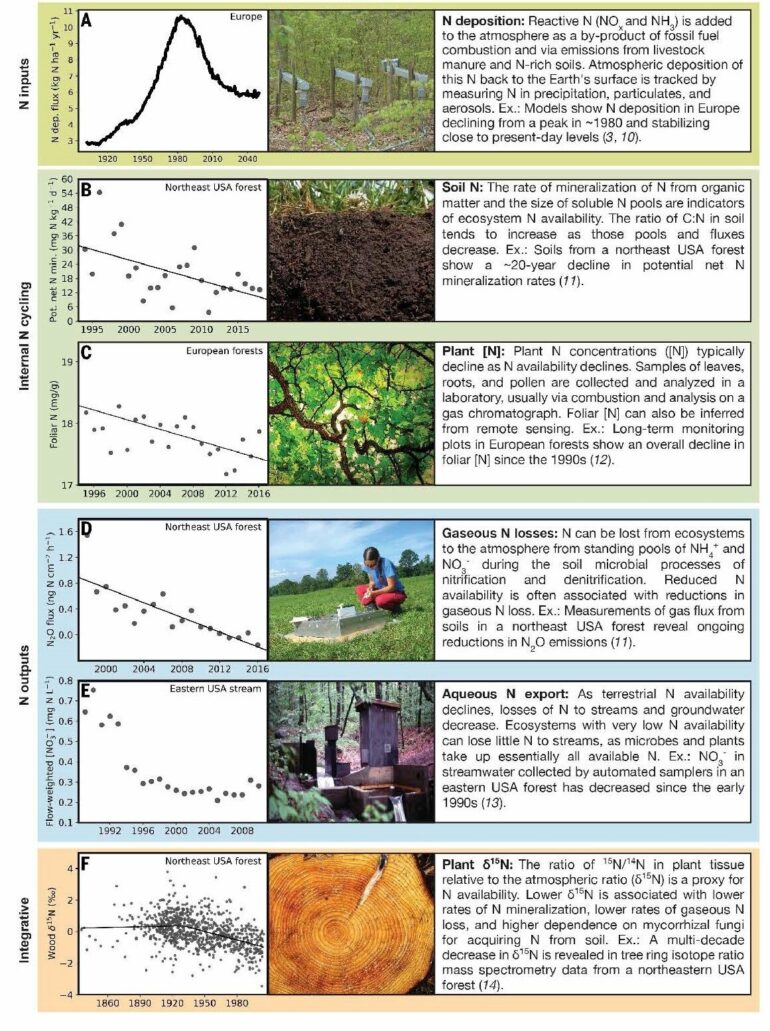 Since the mid-20th century, research and discussion has focused on the negative effects of excess nitrogen on terrestrial and aquatic ecosystems. However, new evidence indicates that the world is now experiencing a dual trajectory in nitrogen availability with many areas experiencing a hockey-stick shaped decline in the availability of nitrogen. In a new review paper in the journal Science, researchers have described the causes for these declines and the consequences on how ecosystems function.

“There is both too much nitrogen and too little nitrogen on Earth at the same time,” said Rachel Mason, lead author on the paper and former postdoctoral scholar at the National Socio-environmental Synthesis Center.

Over the last century, humans have more than doubled the total global supply of reactive nitrogen through industrial and agricultural activities. This nitrogen becomes concentrated in streams, inland lakes, and coastal bodies of water, sometimes resulting in eutrophication, low-oxygen dead-zones, and harmful algal blooms. These negative impacts of excess nitrogen have led scientists to study nitrogen as a pollutant. However, rising carbon dioxide and other global changes have increased demand for nitrogen by plants and microbes. In many areas of the world that are not subject to excessive inputs of nitrogen from people, long-term records demonstrate that nitrogen availability is declining, with important consequences for plant and animal growth.

Nitrogen is an essential element in proteins and as such its availability is critical to the growth of plants and the animals that eat them. Gardens, forests, and fisheries are almost all more productive when they are fertilized with moderate amounts of nitrogen. If plant nitrogen becomes less available, plants grow more slowly and their leaves are less nutritious to insects, potentially reducing growth and reproduction, not only of insects, but also the birds and bats that feed on them.

“When nitrogen is less available, every living thing holds on to the element for longer, slowing the flow of nitrogen from one organism to another through the food chain. This is why we can say that the nitrogen cycle is slowing down,” said Andrew Elmore, senior author on the paper and a professor of landscape ecology at the University of Maryland Center for Environmental Science and at the National Socio-environmental Synthesis Center.

Researchers reviewed long-term, global and regional studies and found evidence of declining nitrogen availability. For example, grasslands in central North America have been experiencing declining nitrogen availability for a hundred years, and cattle grazing these areas have had less protein in their diets over time. Meanwhile, many forests in North American and Europe have been experiencing nutritional declines for several decades or longer.

“The strong indications of declining nitrogen availability in many places and contexts is another important reason to rapidly reduce our reliance on fossil fuels,” said Elmore. “Additional management responses that could increase nitrogen availability over large regions are likely to be controversial, but are clearly an important area to be studied.”

In the meantime, the review paper recommends that data need be assembled into an annual state-of-the-nitrogen-cycle report, or a global map of changing nitrogen availability, that would represent a comprehensive resource for scientists, managers, and policy-makers.

“Evidence, Causes, and Consequences of Declining Nitrogen Availability in Terrestrial Ecosystems” was published in Science.

Provided by
University of Maryland Center for Environmental Science