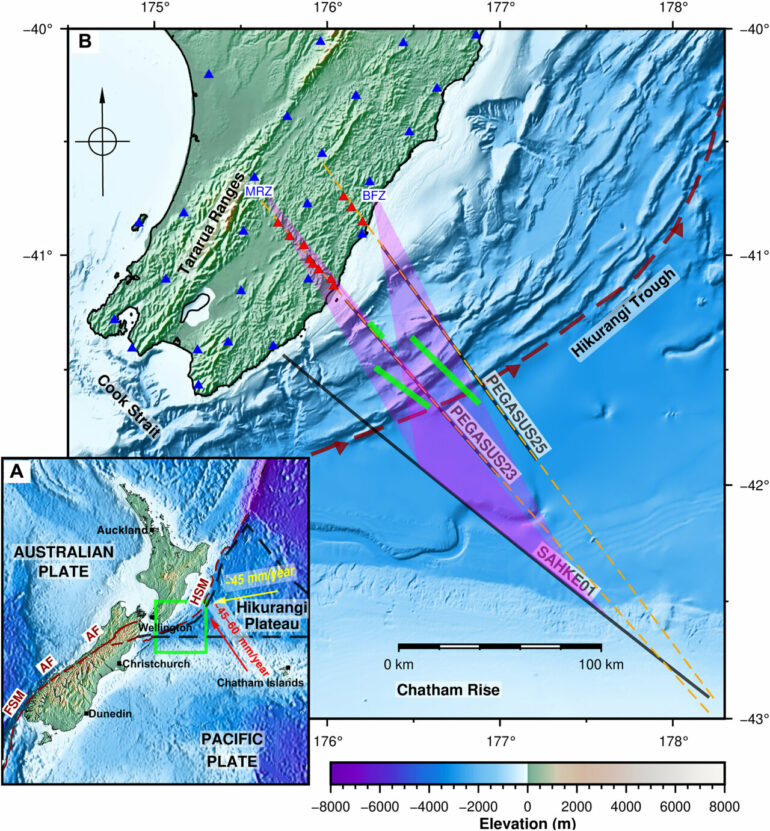 Researchers have identified a 10 km-thick layer containing some softer, melted rock at the bottom of the Pacific plate, a discovery that’s shining new light on the movement of the Earth’s massive tectonic plates.

“We know that relative movement between the Earth’s plates is the cause of earthquakes, volcanoes, and tsunamis. But one of the unanswered questions in plate tectonics is how these massive plates move with respect to one another,” says Professor Martha Savage, from Te Herenga Waka—Victoria University of Wellington.

“What this new research has found is that there appears to be a channel—about 10 km in thickness—that lies between the bottom of the Pacific plate and the Earth’s underlying mantle. This layer contains some softer, melted rock that effectively lowers friction and acts like a skid, aiding plate movement.

“It’s a bit like a cake with a layer of jam in the middle. The jam is the weaker layer, on which the cake—or in this case, the tectonic plate—can slide.”

Professor Savage says the finding is based on analyzing offshore seismic reflections (reflected acoustic energy from bedrock) recorded on seismographs along the Wairarapa coastline.

The research provides an answer to one of the long-standing questions in plate tectonics and helps us comprehend the processes shaping our planet, she says.

“The bases of tectonic plates are the biggest ‘faults’ we have within the Earth in terms of their length and amount of movement. Therefore, what we learn from these deep and well-worn faults may have relevance to fault events in the crust closer to the Earth’s surface,” she says.

At a thickness of approximately 100 km, the Pacific plate is the largest of the plates that cover the globe.

A paper on the study has recently been published in Science Advances.

Provided by
Victoria University of Wellington