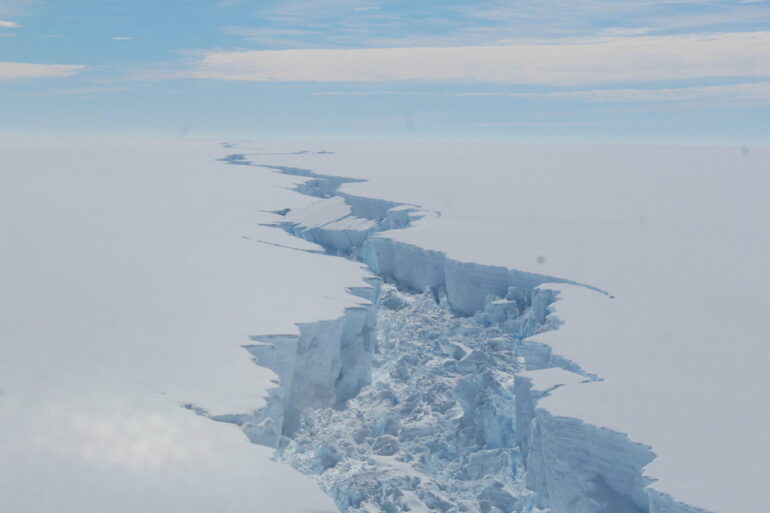 A new study by scientists from British Antarctic Survey (BAS) has used computer modeling to rank the factors responsible for the Larsen C ice shelf melt according to their severity.

The review is an important contribution to our understanding of the largest remaining ice shelf on the Antarctic Peninsula. Research into Larsen C is of high importance as several studies have suggested that the ice shelf may be vulnerable to collapse. As well as fundamentally altering the Antarctic landscape this would contribute indirectly to sea level rise by creating a path for glaciers to flow from the Antarctic continent towards the sea.

In the study—published in the Journal of Geophysical Research: Atmospheres—scientists used computer modeling informed by direct observations of the Antarctic Peninsula region. This enabled them to simulate patterns of surface melting on Larsen C under different atmospheric conditions and to identify which of these was most significant. This is the first study to examine all of these factors over the long term.

The study shows that solar radiation is currently the most important cause of surface melting. The second and third most important drivers of melting were shown to be warm, dry winds called foehn winds and cloud properties respectively. Large-scale weather patterns which establish these conditions were also shown to be crucial contributing factors.

Dr. Ella Gilbert, regional climate modeler at BAS and lead author on this study says that “we should all care about ice shelves because their loss affects us all. When ice shelves collapse it’s like pulling the cork out of a bottle. The glaciers that were previously held back can flow unrestrained into the ocean, adding to global sea levels. If we know what’s making the ice shelf melt now, we can predict the future better, and ultimately that will help us prepare and adapt to future change.”

As the climate changes and temperatures rise, the conditions that permit melt to occur will happen more frequently as surface temperatures will be at melting point more often. Determining which patterns are most important for causing melting at the ice shelf surface is essential to improve our ability to predict the future of Larsen C and inform plans to mitigate the effects of climate change.