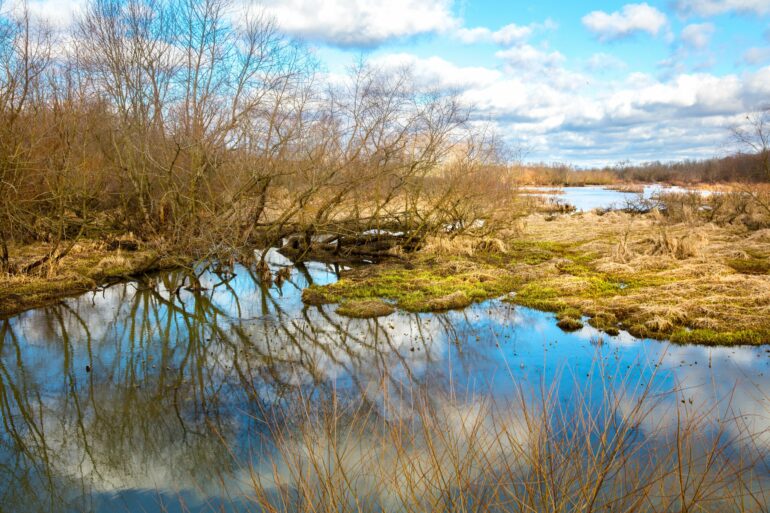 Rewetting and restoring 250,000 acres of southern pocosin peatlands that had been drained for farming but now lie fallow could prevent 4.3 million tons of climate-warming carbon dioxide, now stored in their soils, from oxidizing and escaping back into Earth’s atmosphere each year, a Duke University study shows.

More than 1.7 million acres of coastal peatland bogs in the Southeast have been drained for agriculture and forestry over the years. But about 250,000 acres are no longer used as productive farmland and lie fallow.

Rewetting and restoring these abandoned tracts into functioning wetlands again could prevent 4.3 million tons of climate-warming carbon dioxide, now stored in their soils, from oxidizing and escaping back into Earth’s atmosphere each year, a new Duke University study shows.

That amount equals 2.4% of the total annual reductions in CO2 emissions needed for the United States to be carbon neutral by 2050.

“Southern pocosin peatlands punch far above their weight in terms of their capacity for carbon storage. Acre for acre, they can store significantly more carbon than forests or grasslands,” said Curtis J. Richardson, founding director of the Duke University Wetland Center, who led the research.

Achieving such a significant reduction in annual CO2 emissions is a powerful incentive for making the restoration of the drained peatlands worldwide a priority, Richardson said. Another powerful incentive is what might happen if we don’t.

The new study estimates that if one quarter of the drained lands caught fire in one year and the fires were intense enough to burn down deep into their peaty soils—which can happen at drained sites—the amount of CO2 released would equal about 18% of the total U.S. emissions reduction target for that year.

“That would be a disastrous setback,” said Richardson, who also holds an appointment as research professor of resource ecology at Duke’s Nicholas School of the Environment.

He and his colleagues published their peer-reviewed study Sept. 2 in Global Change Biology.

Pocosin peatlands are found along the Southeast coast from Virginia to northern Florida. They have deep peat soils and are covered by woody shrubs rather than the low-growing Sphagnum moss found in more northern peatlands. Left undisturbed, stored carbon can remain locked in pocosin organic soil for millennia due to natural antimicrobial compounds called phenolics that prevent the waterlogged peat from decaying rapidly, even during times of drought.

By digging thousands of miles of drainage ditches to lower the water table and convert the peatlands into farms, however, we’ve undercut their storage capability and turned many of the sites from carbon sinks into carbon sources.

To gauge how much of these losses could be reversed by blocking the ditches and putting in small dams to help retain rainwater in the soil, the researchers conducted field experiments at Pocosin Lakes National Wildlife refuge in eastern North Carolina, and a privately owned tract of drained peatland that Richardson and his team have studied for three years to assess carbon losses and gains under drained and rewetted conditions.

Raising the water table to 20 centimeters beneath the surface could turn a site from being a carbon source back into a carbon sink.

“When you see numbers like this, it makes you realize how important rewetting these drained peatlands is,” Richardson said.