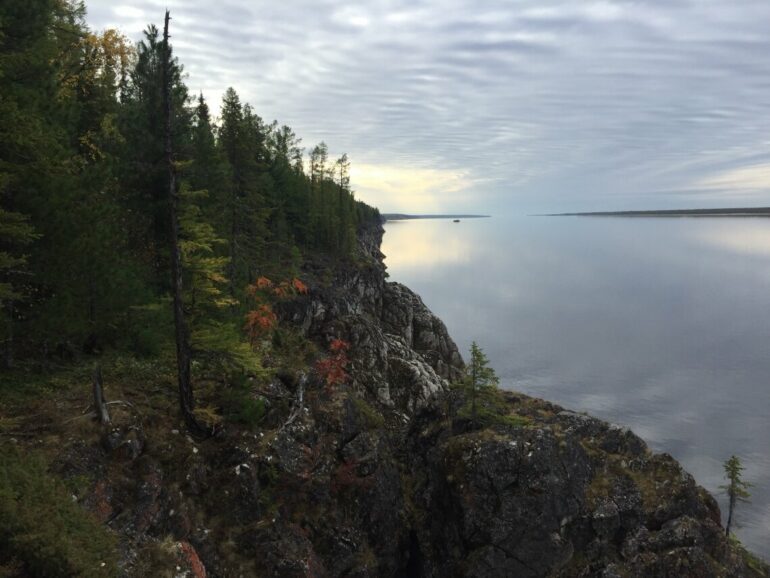 Irina Panyushkina grew up in Siberia, near the Arctic Circle. She was raised on stories of explorers trudging through seas of ice to reach the North Pole.

Now, she is a climate scientist and associate research professor of dendrochronology in the University of Arizona Laboratory of Tree-Ring Research. And she is trying to understand how a warming world is transforming the place she once called home.

Someday, the Arctic Ocean may no longer host ice, since the northern regions of the world are warming are faster than the rest—a trend scientists refer to as Arctic amplification. As Arctic ice melts, new opportunities and challenges for humans will arise, researchers say.

Freshwater flowing into the Arctic Ocean from the continent is thought to exacerbate Arctic amplification, but the extent of its impact isn’t fully understood. New research led by Panyushkina measures how the flow of the Yenisei River—the largest freshwater river that flows into the Arctic Ocean—has changed over the last few hundred years, and describes the impact freshwater has had on the Arctic.

What trees can tell us

Data collected by instruments at the upper reaches of the Yenisei River in Tuva, in southern Siberia, only goes back so far. To overcome this, Panyushkina and her team used tree-ring data to double the number of years’ worth of the stream flow data they had, allowing them to look back 300 years.

Stream flow, or the amount of water that moves through a certain area of a river over time, can be inferred by measuring changing tree-ring thickness over the years. Measurements of stream flow over specific seasons can even be teased out of the data.

Annual stream flow information is commonly used by water managers to reveal the average changes in stream flow trends. But Panyushkina and her team did something novel when they decided to also investigate winter stream flow specifically.

“We found an unprecedented increase in the winter flow rate over the last 25 years,” Panyushkina said. This winter flow rate is nearly 80% above the average seen over approximately 100 years.

“In contrast, annual flow fluctuated normally during the 300-year period, with only a 7% increase over the last 25 years,” Panyushkina said.

Since ice covers rivers during winter in Siberia, the team’s stream flow measurements only captured information about river water that originated underground rather than from the sky. That includes water from thawing permafrost, as well as water from sub-permafrost aquifers, as permafrost loss leads to an increased exchange of water between the river and aquifers. These two sources of groundwater are warm compared to the frigid air above, and when they eventually flow into the Arctic Ocean, they melt the ice.

Forest fires are also thought to be a driver of Arctic ice melt.

“We know the frequency and intensity of forest fires in Siberia have been increasing,” Panyushkina said. “When fires happen in forests with permafrost, there is deep thawing under the fire event, and the affected area often doesn’t recover for up to 60 years. When we have large-scale fires and long-burning fires and more frequent fires, we’re maybe hitting the critical point when permafrost degradation cannot return to normal. Forest fires are also another process that increases connectivity between aquifers and stream flow.”

The combined effects of permafrost degradation and fires are very strong at the Yenisei River basin, with more fresh water and heat flowing into the Arctic Ocean in recent decades, according to the study. In turn, melting sea ice also exacerbates global warming.

“Research interest in the region is booming because the surface temperature is warming much faster here than anywhere else in the world,” Panyushkina said. “It’s a hot spot for climate research, and because I grew up there and understand how the system works, it’s a natural topic of study for me. I’m also very interested in knowing the impact of an ice-free Arctic on the surrounding landscape. Humans have never seen an ice-free Arctic before, ever. My mind still cannot comprehend how the Arctic Ocean can be free of ice.”

Existing oil, gas and coal extraction sites need to be closed down to stay within 1.5 C, findings show

By the middle of the century, changing sea ice conditions are expected to lead to greater navigability for open water-vessels crossing the Arctic. A future trans-Arctic shipping route called the Supra Polar Route will link the Atlantic and Pacific Oceans through the Arctic, potentially paving the way for more trans-Arctic commerce.

There is a need to quantify the Arctic amplification impacts to manage and regulate Arctic seas of the future, Panyushkina said.

“This strong prospect of the global trade fleet entering the Arctic opens the Pandora’s box of near-future geopolitical and environmental issues and reinforces the urgency for a new regulatory framework by international organizations to ensure adequate environmental protections and vessel safety standards,” she said.

To understand more about Arctic amplification and its consequences, Panyushkina and her team plan to study other rivers in Siberia.

“There are two more Siberian rivers similar in size to the Yenisei,” she said. “If we can quantify the stream flow from those rivers, we’ll have more precise and clear understanding of its impact on the Arctic.”