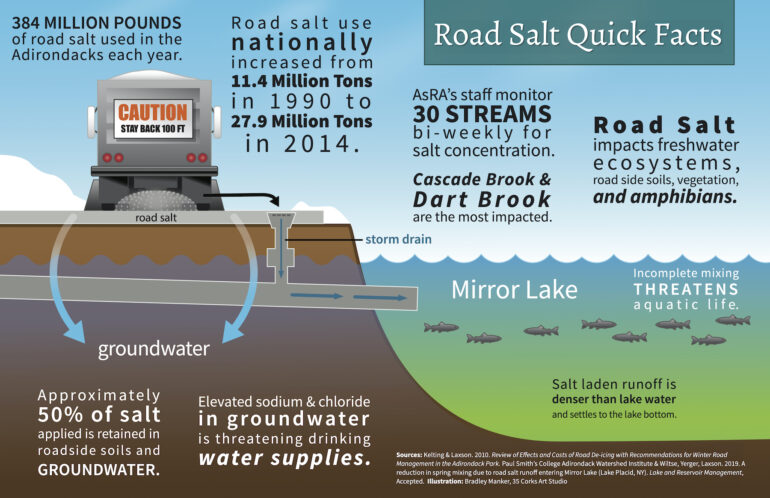 For many parts of the United States, winter weather can impact road conditions. To reduce hazardous conditions caused by snow and ice, many counties, municipalities, homeowners, and others use deicers. Salt is the most common option to treat roads.

But how might road salt impact groundwater? Does it have impacts only in winter, or does it have lasting impacts year-round?

The research was published in the Journal of Environmental Quality.

“Most stormwater management practices are designed to protect surface waters,” says McQuiggan. “Infiltration basins, and even some types of green infrastructure, are designed with the idea that stormwater benefits from a natural ‘filtering’ of contaminants as it infiltrates through soil, and contaminants dilute as that recharge mixes with existing groundwater.”

She adds that these are used to prevent contaminants like salt from being discharged straight into surface water. But in states like Delaware, groundwater contributes up to 80% of the water in rivers and streams. This means that salt will eventually reach rivers and streams, just on a longer timescale.

The researchers monitored the infiltration basin from mid-May 2019 to mid-February 2022 to evaluate the impact road salt had on groundwater quality. One aspect of their findings showed that geological complexity, such as differences in subsurface soil properties, influenced how salty stormwater moved through groundwater.

The researchers explained it is important to consider things like placement, depth, and frequency of monitoring groundwater to get the full picture.

The team found that groundwater is impacted by road salt throughout the year, not just during winter. This is because the salt is retained in the soil in the infiltration basin. Salt is made of sodium and chlorine atoms, and chloride more easily moves in water. However, sodium more easily latches onto soil particles.

During other parts of the year, stormwater that does not contain much salt enters the basin and flushes sodium from the soil into the water. The results of the study also suggest that a higher salt content can cause radium to enter the groundwater.

“Climate can really impact the timing of how this all plays out,” McQuiggan explains. “For example, if it’s a particularly dry spring and summer, then the sodium can take longer to reach groundwater. And in Delaware, snowfall typically melts and runs off the roads within a few days of falling. In colder climates it can stay frozen for months.”

While there are other deicers available, they are not all as effective as road salt and each has its own pros and cons. Sand is a popular option to increase traction and minimally affect groundwater but could require extra maintenance like street sweeping, says McQuiggan.

“There are even carbohydrate deicers, like beet juice,” she says. “However, most alternatives are used in conjunction with salt or acetate because those are so effective and road safety is incredibly important. Each option has its pros and cons in terms of impact to the environment and cost.”

Stream restoration trade-offs: Higher environmental benefits to be had where homeowners are less willing to pay

Many cold areas depend on deicer to ensure the safety of drivers, bikers, and pedestrians. The researchers say their work provides direction on how to best monitor the impacts of deicer on groundwater so adjustments can be made if needed.

“Groundwater supplies almost half of all drinking water worldwide,” says McQuiggan. “In central and southern Delaware, groundwater is the only source of potable drinking water. Hopefully the results of this project will encourage best management practices for deicer use to protect groundwater resources.”

Provided by
American Society of Agronomy