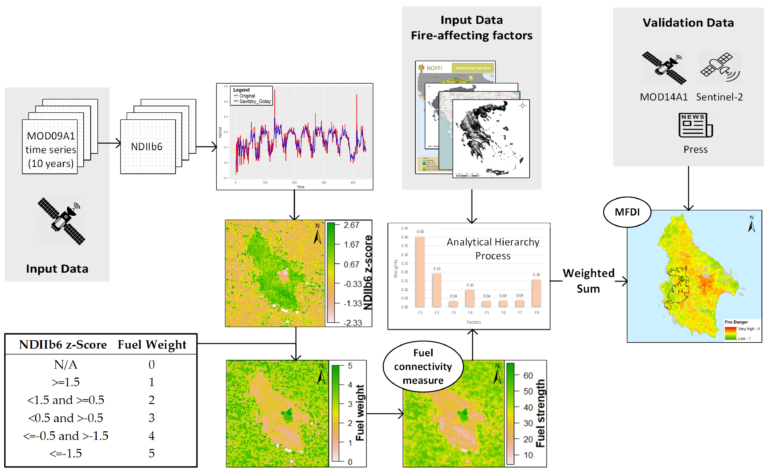 This summer’s western wildfire season is likely to be more severe than average but not as devastating as last year’s near-record, according to an experimental prediction method developed by scientists at the National Center for Atmospheric Research (NCAR).

The new method, detailed in a peer-reviewed study, analyzes precipitation, temperatures, drought, and other climate conditions in the winter and spring in order to predict the extent of wildfires across the western United States during the following summer. The research team developed the method by applying machine learning techniques to observations of every wildfire season since 1984, when current satellite measurements of fires first became available.

Although scientists had previously known that climate conditions during the spring and summer influence fire risk, the new study demonstrates that even several months before peak fire season, the climate across large parts of the West plays an important role in setting the stage for the blazes.

“What our research shows is that the climate of the preceding winter and spring can explain over 50% of the year-to-year variability and overall trend in summer fire activity,” said NCAR scientist Ronnie Abolafia-Rosenzweig, the lead author of the study. “This gives us the ability to predict fire activity before the summer fire season begins.”

Applying their research method to the upcoming fire season, the scientists predicted that fires this summer will burn 1.9–5.3 million acres in the West, with 3.8 million acres being the most likely total. Although well short of the record 8.7 million acres burned in 2020, this would represent the 8th largest burned area since 1984, part of a long-term trend of more widespread conflagrations.

The scientists emphasized that their prediction is currently for research purposes only. But they said their method, once further tested and improved, could help provide guidance to firefighting agencies in the future. It provides more explicit information than current seasonal forecasts that may call for a comparatively mild or destructive wildfire season without predicting how many acres are likely to burn.

“This information can be extremely useful to firefighting agencies as they allocate resources and prepare for the upcoming fire season,” Abolafia-Rosenzweig said.

Abolafia-Rosenzweig and his co-authors describe the prediction method in a new study in Environmental Research Letters.

With wildfires becoming increasingly widespread across much of the West, the NCAR team wanted to see if climate conditions early in the year can offer clues to the extent of the blazes during summer, when fire season peaks.

The scientists turned to ensembles of generalized additive statistical models, which are widely used machine learning tools that help reveal complex relationships—in this case, the correspondence between climate conditions from November to May and the extent of burned areas during the following June to September. They analyzed every year since 1984, focusing on regions in the West that are reliant on snowpack for water.

The research team found that the dryness of air (vapor pressure deficit) in the lowest part of the atmosphere during winter and spring has a particularly pronounced effect on summertime fires. That dryness influences the amount of snow that falls, and in turn, is affected by snow on the ground that eventually releases moisture to the overlying air. The extent of April snowpack is especially significant because it moistens both the ground and air as it melts during the warmer months.

“We found that April snowpack has a persistent influence on the land and atmosphere during the summer,” said Abolafia-Rosenzweig. “If you have a large snowpack in April, it will take longer to melt and there’s a more persistent transfer of moisture from the land to the atmosphere during late spring to summer. But in the case of a lesser snowpack, you’ll have both a drier land surface and a drier atmosphere in summer, which results in conditions that are more conducive for the spread of fires.”

The scientists also studied a number of additional climate variables, including precipitation, temperature, soil moisture, evapotranspiration, and indexes of drought, examining how each variable during different seasons influences the extent of summer fires.

The study also looked at the overall impact of climate change on fire activity in the West. As wildfires have gradually grown in size since 1984, the research team’s modeling showed that climate variables such as rising temperatures and persistent droughts can explain 83% of that increase.

This year’s experimental prediction—which encompasses the entire West, not just snow-reliant regions—indicates that fires will burn 38% more of western lands this summer than the average since 1984. The prediction does not include early-season fires before June, such as the widespread blazes that have devastated New Mexico this spring, nor does it estimate how various western regions will fare. In the future, however, the scientists may add such details.

“Our plan is to include local climate variables such as winds so we can know the specific fire conditions on a state or even county level,” said NCAR scientist Cenlin He, a co-author of the study. “This will make it more valuable to stakeholders and fire managers so they can anticipate fire activity for specific regions in the West.”


Citation:
Scientists develop method for seasonal prediction of wildfires in the US West (2022, May 24)