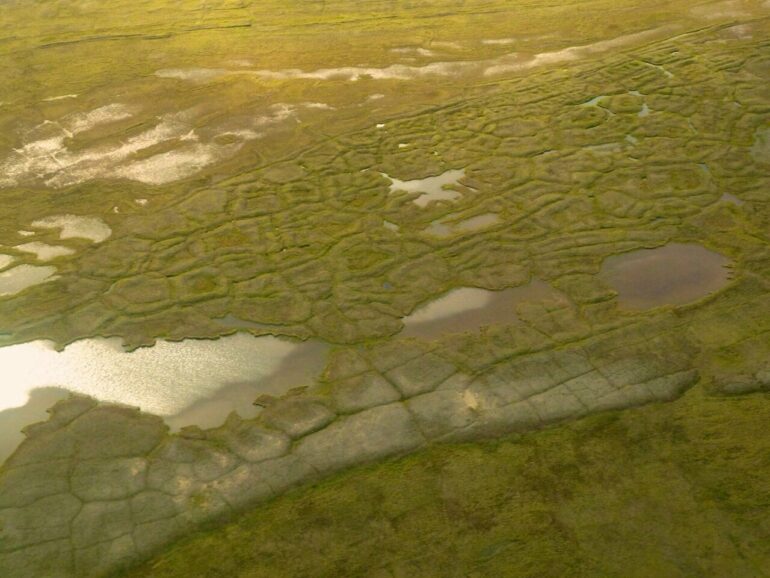 The interaction of elemental iron with the vast stores of carbon locked away in Arctic soils is key to how greenhouse gases are emitted during thawing and should be included in models used to predict Earth’s climate, Oak Ridge National Laboratory scientists found.

Researchers set out to explore and model the chemistry going on as the Arctic permafrost thaws in response to global warming. Northern permafrost soils contain an estimated 1,460 billion to 1,600 billion metric tons of organic carbon—about twice as much as in the atmosphere, according to the National Oceanic and Atmospheric Administration.

Chemical processes in the soil control how organic matter decomposes and is stored in soils and whether it converts to carbon dioxide or the more powerful greenhouse gas methane when released into the atmosphere.

Arctic soils are typically organic-rich and often have a high iron content, frequently visible as rusty deposits in flooded soils in the region, said ORNL modeler and principal investigator Benjamin Sulman. But current Earth system models do not take iron cycling into account when predicting the climate-warming potential of thawing permafrost.

A new chemical reaction model created by ORNL incorporating iron, carbon and oxygen concentrations and soil acidity suggests that iron cycling can have a profound effect on whether carbon dioxide or methane is produced in repeatedly flooded Arctic soils, as described in the Journal of Geophysical Research: Biogeosciences. Iron can be used by soil microorganisms as a substitute for oxygen under waterlogged conditions, which produces carbon dioxide using a strategy that is typically thought to compete with methane production.

“Conventional wisdom says that if there’s more iron in the soil it should reduce the amount of methane that’s produced,” Sulman said. “But we found that’s not necessarily true. Under the right conditions we see a synergistic interaction where iron cycling changed the acidity of the soil in a way that also made it more advantageous for methane production.”

The scientists found that repeated flooding and drying of soils can be a key driver in permafrost greenhouse gas emissions by replenishing forms of iron that are gradually depleted by flood.

The models are based on data gleaned from incubation experiments with soils collected in Alaska’s permafrost as part of the Next-Generation Ecosystem Experiments Arctic, or NGEE Arctic. Results from those experiments highlighted the importance of iron cycling and led to the modeling work, in what is known as a ModEx paradigm, Sulman said.

ModEx, or the model-experiment approach, integrates observations and measurements from experiments with computer models of the same processes in an ongoing conversation that informs both the improvement of models and the design and interpretation of experiments. This loop ensures that models reflect the latest findings on critical systems, and the simulations in turn identify knowledge gaps and guide future experiments.

“Typically, soil research has focused on either dry or wet conditions, but not both,” said ORNL’s Elizabeth Herndon, whose soil and water sampling work in the Arctic provided data for the project. “The reality is that soil saturation can fluctuate a lot. You’ll have a rain event, and that results in oxygen-depleted conditions where microorganisms are essentially breathing iron to drive their metabolism. But when the soil dries, oxygen is reintroduced. In this paper, we wanted to explore what happens when you have these widely varying conditions.”

The challenge with the project was moving to a model based on more than just the carbon cycle. “You essentially raise the bar of how much data you need to make sure that the model is giving you useful predictions,” Sulman said. “That’s where having these rich measurements from laboratory incubations of Arctic soils was very important for producing data about how the iron cycle and soil acidity were changing over time.”

Advancing science with the ModEx approach

“From an experimentalist point of view, having discussions with modelers and deciding how to quantify certain processes helps me to think about how we can structure our experiments to get the information we need,” Herndon said. She stressed to modelers the importance of representing specific processes in the simulation, including the presence of iron oxide minerals and environmental fluctuations that can trigger chemical changes in the ecosystem and alter carbon emissions.

Next steps for the research include incorporating the chemical reaction model into the land segment of the U.S. Department of Energy’s Energy Exascale Earth System Model. Sulman said he also wants to test some of the new model’s soil chemistry hypotheses at NGEE Arctic field sites and then integrate resulting new data into the model, continuing the ModEx cycle.

“These two halves of the ModEx loop really help fill in some of the missing pieces that can come out of either modeling or experimentation,” said Sulman. “If you’re doing modeling that’s not well connected with measurements, it’s easy to diverge a bit from reality and end up working on questions that are not important on the field scale. Or you end up with a model that is not well grounded enough to behave like a real system.”

In terms of planning experiments, modeling is useful for generating hypotheses and narrowing down some of the specific processes that seem to have the biggest impact on scientists’ ability to answer questions that matter, Sulman said. “In this instance, what we’ve found so far can help us predict how these carbon dioxide and methane fluxes will change over time, especially given hydrological patterns. This detailed knowledge of the permafrost’s soil chemistry improves our ability to predict the impact of warming temperatures.”

Sulman expects to employ a similar approach to other hydrologically dynamic ecosystems ORNL is studying, such as coastal wetlands, to better understand the carbon cycle.