Scientists say PFAS contamination should be presumed at over 57,000 US sites 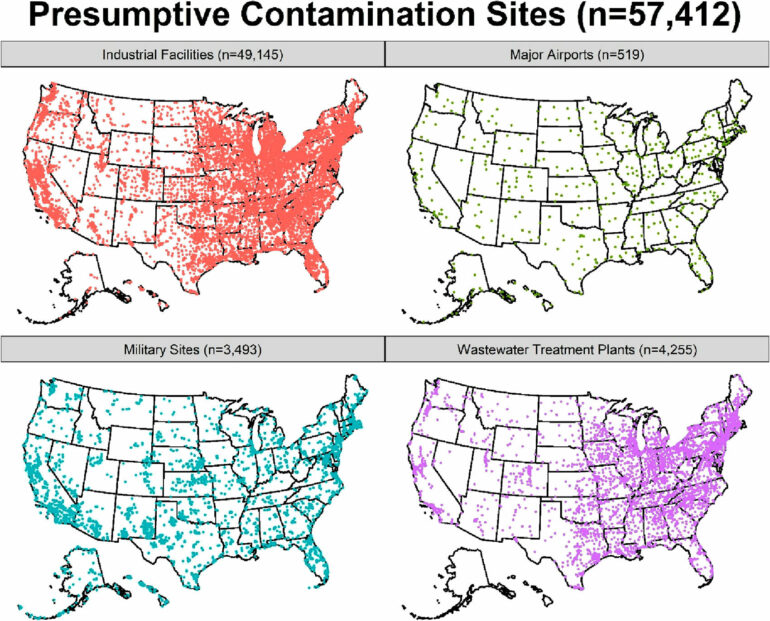 Tens of thousands of locations across the United States may be contaminated by PFAS (per- and poly-fluoroalkyl substances), according to a study published today in Environmental Science & Technology Letters.

According to the research team, PFAS contamination should be presumed at certain industrial facilities, sites related to PFAS-containing waste, and locations where fluorinated firefighting foams have been used. The authors integrated high-quality, publicly available data into a single map of 57,412 locations, with sites in all 50 states and the District of Columbia.

“PFAS contamination at these locations is very likely,” said Dr. Alissa Cordner, senior author on the paper and co-director of the PFAS Project Lab. “We know that PFAS testing is very sporadic, and there are many data gaps in identifying known sites of PFAS contamination. That’s why the ‘presumptive contamination’ model is a useful tool in the absence of existing high-quality data,” Cordner said.

PFAS are a major concern for public health. The chemicals have been measured in countless drinking water systems, in the bodies of humans and wildlife around the globe, and even in rainwater at levels that are higher than the EPA says are safe for human consumption.

“Not only do we all have PFAS in our bodies, but we also know that PFAS affects almost every organ system. It is essential that we understand where PFAS are in our communities so that we can prevent exposures,” said Dr. Linda Birnbaum, co-author on the paper and scientist emeritus and former director of the National Institute of Environmental Health Sciences and the National Toxicology Program.

“While it sounds scary that there are over 57,000 presumptive contamination sites, this is almost certainly a large underestimation,” said Dr. Phil Brown, director of Northeastern University’s Social Science Environmental Health Research Institute and co-author on the paper. “The scope of PFAS contamination is immense, and communities impacted by this contamination deserve swift regulatory action that stops ongoing and future uses of PFAS while cleaning up already existing contamination,” Brown said.

“PFAS testing is expensive and resource intensive. We have developed a standardized methodology that can help identify and prioritize locations for monitoring, regulation, and remediation,” said Dr. Kimberly Garrett, post-doctoral researcher at Northeastern University and co-author on the paper.

Identifying presumptive contamination sites enables governments, industries, and communities to rapidly and systematically identify potential PFAS exposure sources. “It’s past time to ‘turn off the tap’ with new PFAS use and emissions,” said Sharyle Patton, co-author on the study and program director at Commonweal.

A publicly available map of known and presumptive contamination sites is available.

Citation:
Scientists say PFAS contamination should be presumed at over 57,000 US sites (2022, October 12)