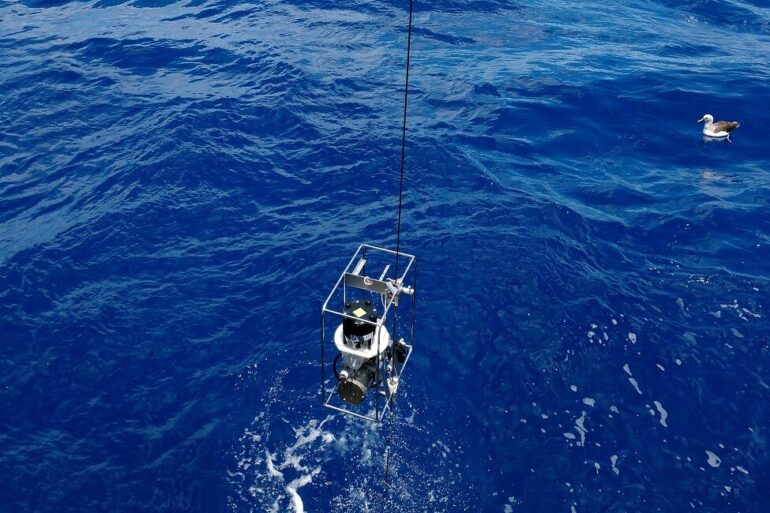 About 51 trillion microplastics are floating in the surface waters of oceans around the world. Originating from various types of plastics, these tiny fragments (less than 5 millimeters in length) pollute natural ecosystems. Hundreds of studies have surveyed plastic debris on the surface or near surface of the ocean. However, these studies only “scratch the surface,” and do not provide a complete inventory of what’s lurking beneath.

A study led by Florida Atlantic University is the first to unveil the prevalence of plastics in the entire water column of an offshore plastic accumulation zone in the southern Atlantic Ocean and implicates the ocean interior as a crucial pool of ‘missing’ plastics.

Results, published in the journal Global Change Biology , demonstrate that small microplastics are critical, underexplored and integral to the oceanic plastic inventory. In addition, findings show that weak ocean current systems contribute to the formation of small microplastics hotspots at depth, suggesting a higher encounter rate for subsurface particle feeders like zooplankton.

“Our study highlights the urgency for more quantification of the deep-ocean microplastics, especially the smaller size fraction, to better understand ecosystem exposure and to predict the fate and impacts of these microplastics,” said Tracy Mincer, Ph.D., senior author and an assistant professor of biology at FAU Harbor Branch Oceanographic Institute and FAU Harriet L. Wilkes Honors College.

To gain a better mechanistic understanding of how plastics sink from the ocean surface beyond the mixed layer and ultimately to abyssal depths of the ocean, the researchers sampled plastic particles in the South Atlantic Subtropical Gyre using in-situ high-volume filtration, Manta net and MultiNet sampling, combined with micro-Fourier-transform-infrared imaging.

Higher density polymers such as alkyd resins, used in most commercial oil-based coatings such as ship hull paints and polyamide, commonly used in textiles like clothing and ropes and fishing nets, made up more than 65 percent of the total pump sample count in the study. This finding highlights a discrepancy between polymer compositions from previous ocean surface-based surveys, which are typically dominated by buoyant polymers such as polyethylene used for packaging film and grocery bags and polypropylene used for plastic containers and reusable water bottles.

“As plastic particles disintegrate into smaller size fractions, they can become harmful in different and unpredictable ways that are only now beginning to be understood,” said Mincer. “These micron-size microplastics can move across the gut epithelium, become trapped in biomass, and have the potential to transfer through marine food webs, posing an unknown ecological risk and biogeochemical impacts.”

As commercial fishing efforts scale up to harvest marine species for human consumption, the researchers say that studies focusing on smaller microplastics ingestion are urgently needed to assess the extent of plastic contamination in biomass.

The combined analysis procedure used by Mincer, Zhao and collaborators from the Royal Netherlands Institute for Sea Research and Woods Hole Oceanographic Institute provided a more integrative view of the distribution, abundance, dimensions and chemical nature of plastic particles in the interior of an ocean gyre.