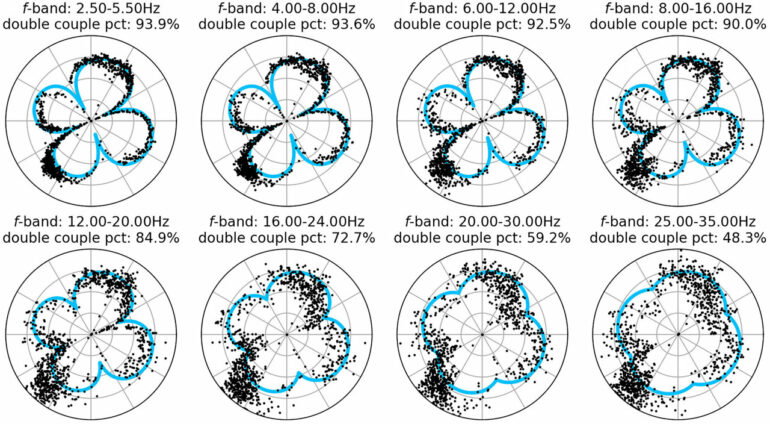 New research from The University of Texas at Austin could change the way scientists think about potential damage from earthquakes.

The study examined data from one of the densest seismic arrays ever deployed and found that earthquakes emit their strongest seismic shockwaves in four opposing directions. The effect, which leaves a pattern resembling a four-leaf clover, has been known for decades but never measured in such vivid detail.

Daniel Trugman, an earthquake geophysicist at the Department for Geological Sciences in the UT Jackson School of Geosciences, said that the study looked at only one type of seismic shaking caused by very small earthquakes in northern Oklahoma.

“What’s important in these results is that close to the source we’re seeing a variation in ground motion, and that’s not accounted for in any sort of hazard model,” Trugman said. He added that efforts were already underway to see how the phenomena plays out in California’s big fault systems.

The analysis was published in the September issue of Geophysical Research Letters and is based on measurements of two-dozen small earthquakes recorded by the LArge-n Seismic Survey in Oklahoma (LASSO), an array of 1,829 seismic sensors deployed for 28 days in 2016 to monitor a remote corner of the state measuring 15 by 20 miles.

When earthquakes strike, they release a thunderclap of seismic energy at many frequencies, but the actual ground shaking people feel ranges from about 1 hertz to 20 hertz. The study found that low frequency energy—about 1 to 10 hertz—shot from the fault in four directions, but barely registered outside of the four-leaf clover pattern. This is important because buildings are more vulnerable to low frequency waves. The four-leaf clover pattern wasn’t found for higher frequency waves, which traveled at equal strength in all directions, like ripples in a pond.

Co-author Victor Tsai, a geophysicist at Brown University, said that the reason the Earth shook unevenly at different frequencies might have something to do with the complex geometry of earthquake faults and the broken-up material packed between them.

“What happens when you have an earthquake is that pieces of broken rock inside the fault zone start to move around like pinballs,” he said. The jostling pieces redirect the energy randomly but at lower frequencies, seismic waves simply bypass the rough geologic mess near the fault, traveling in a nice four-leaf clover pattern just as physics predicts.

This means that on the surface, a person might feel the same shaking regardless of where they stood, but buildings—which are sensitive to low frequency waves—would feel the earthquake much more intensely within the lines of the four-leaf clover pattern.

Geophysicists have long known about this pattern; it’s taught in seismology 101. But, until now, evidence of its effect has been sparse. That’s because over large distances seismic waves are refracted regardless of frequency, smoothing out their differences and making earthquakes seem the same in all directions.

Near an earthquake’s source, however, the pattern should be distinct. That’s where the LASSO array came in. Its closely packed sensors recorded earthquakes while they were unfolding, gathering measurements from hundreds of locations in northern Oklahoma that the U.S. Geological Survey, which funded and deployed the array, made freely available online.

To test their idea about uneven shaking near faults, Trugman developed algorithms to filter the LASSO data. At low frequencies, each earthquake showed a four-leaf clover pattern of shaking; at higher frequencies there was no clear pattern, just as Tsai had predicted.

Although the tremors recorded by the LASSO array were barely perceptible, the physics that drive them should be the same for stronger quakes. The scientists have already begun examining larger faults to see whether their age or shape can change the intensity of ground motion. Their goal is to build a catalog of earthquake zones, showing which faults can generate the strongest and most dangerous types of seismic waves.