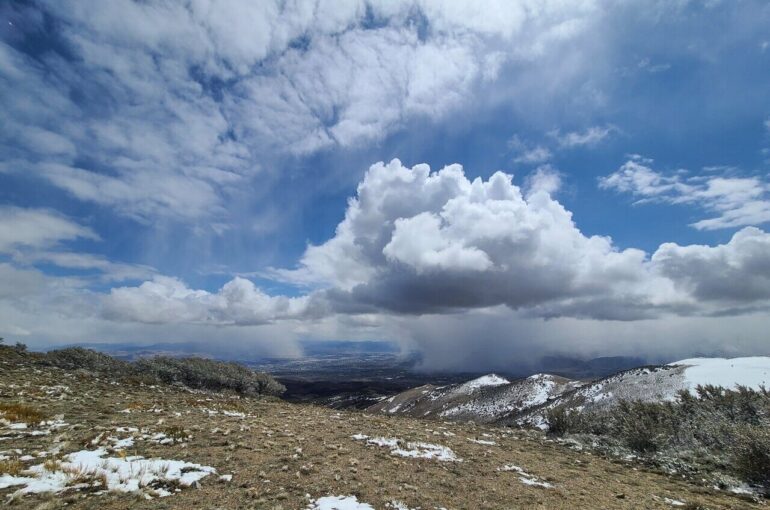 Snow-capped mountains aren’t just scenic—they also provide natural water storage by creating reservoirs of frozen water that slowly melt into watersheds throughout the spring and summer months. Much of the Western U.S. relies on this process to renew and sustain freshwater supplies, and new research underscores the impacts of extreme weather conditions on this annual cycle.

In a study published Jan. 5 in Environmental Research Letters, DRI researchers examine the role of spring heat waves on the melting rates of mountain snowpacks across the West. They found that in April 2021, record-breaking snowmelt rates occurred at 24% of all mountain snowpack monitoring sites in the region, further compounding the impacts of extended drought conditions. Rapid snowmelt increases the time when our natural snowpack reservoir is emptied and when this water is most needed later in the warm season.

“One thing that stood out was the spatial pattern,” says Daniel McEvoy, Ph.D., DRI climatologist and co-author of the new study. “It wasn’t just one single mountain range or one part of the West—there were snowmelt records across the entire Western U.S., in all 11 states.”

By examining data from mountain snowpack monitoring stations, the researchers found that between April 1 and May 1, record high temperatures caused dramatic decreases in snowpacks. Although record snowmelt rates occurred throughout the entire month of April, two heat waves stood out. The first week of April saw maximum temperatures 4–6 degrees Celsius above average, driving the most widespread record snow melt centered on the Rocky Mountains. Another heat wave the third week of April centered on the Pacific Northwest, with maximum temperatures 5–8 degrees Celsius above average, primarily in the Cascade Range.

“Summer heat waves are studied extensively, but people don’t often care as much about a spring heat wave because the actual air temperatures don’t usually lead to human health impacts,” McEvoy says. “But at the same time, they are creating these hydrological and climatological extreme impacts.”

Several factors contributed to the rapid rate of snowmelt in the spring of 2021. On top of record high maximum temperatures, record high minimum temperatures prevented snowpacks from re-freezing at night, and clear, sunny skies exposed snow to the melting energy of the sun’s rays. The ongoing drought, already widespread in late 2020, also created parched soils that absorbed more of the spring snowmelt in 2021 before it could run off into streams and reservoirs or replenish groundwater.

“What really motivated this study was that in May and June of 2021, I kept hearing from other climatologists, meteorologists, hydrologists, and even skiers, that ‘the snow really came off the mountains fast this year,'” McEvoy says. “I kept hearing that over and over again.”

Although many snowpacks across the West were below average due to low winter snowfall, water resource managers were unable to forecast the exacerbating effects of the rapid spring snowmelt on water supplies. With reservoirs below expected levels based on early-season snowpack predictions, less water flowed to downstream users. Reduced water availability also impacted hydropower production, which made providing energy during the summer and fall heat waves more challenging. By the end of summer 2021, 76% of the West was in severe drought, according to the U.S. Drought Monitor.

“This was one of several extreme climate events over the course of that year,” McEvoy says of the spring 2021 heat wave. “There was a compounding set of climate extremes that all contributed to this rapid expansion and intensification of the drought across the Western U.S. during the late spring and summer.”

The researchers say these spring heat waves are consistent with the long-term trend of spring warming across the West, and that because of this, April 1 may no longer be a reliable benchmark for evaluating snowpack levels and their seasonal contributions to western water supplies. 2021 was also an active wildfire season in California and the Pacific Northwest, consistent with previous research linking reduced mountain snowpacks and spring heat waves with increased wildfire potential.

McEvoy says that future research will examine the impacts and frequency of spring heat waves, as well as ways to predict them by looking at global atmospheric circulation patterns, such as the ones that cause La Niña.

Maps of the past may shed light on our climate future

“Understanding the predictability of these types of snowmelt events would be helpful for both drought early warning and water resource management,” says McEvoy.