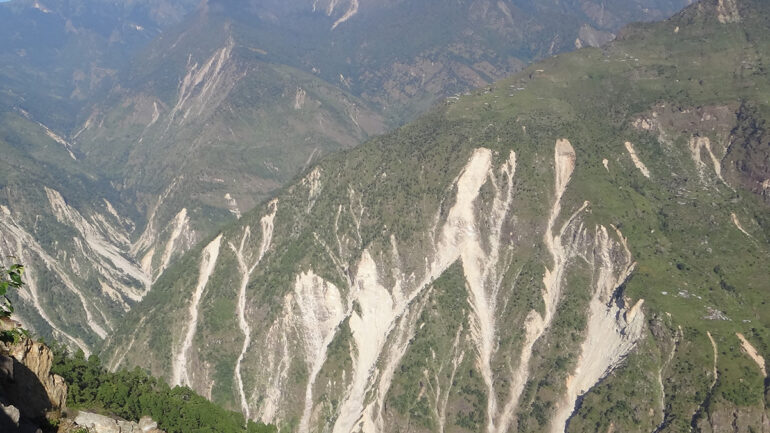 Gravity and rock physics say slopes steeper than about 30°—known as the critical threshold angle, or the angle of repose—shouldn’t really exist, yet they do. These steep slopes and near-vertical cliffs can be seen in the Himalayas and in Yosemite National Park, for example. For some geologists, the question is not only how “oversteepened” slopes exist but also how long they stay that way.

“The rock masses in these oversteepened parts are unstable by nature, and they are prone to failure. These are places where landslides are most likely to occur,” said Gen Li, a geologist at the University of California, Santa Barbara.

In a new study published in Geophysical Research Letters, Li et al explore the residence times, or “lifetimes,” of oversteepened slopes in the eastern margin of the Tibetan Plateau. The study combines 20-year records of landslides, long-term uplift rates, and models of erosion to estimate slopes’ lifetimes. Their analyses focused on the idea of “excess” rock, the volume of rock that extends beyond that critical threshold angle, which changes among rock types and varies between 29° and 39° in their study region. By calculating the approximate lifetimes of slopes with different amounts of this excess rock, the researchers found something quite unexpected.

Steeper slopes hang around for longer. The average life span for all oversteepened slopes in the study area was determined to be 61,000–157,000 years, but very steep slopes have a life span an order of magnitude longer than shallower slopes.

“It’s a very interesting and intriguing observation, that steeper slopes can reside for longer,” said Li.

The result is counterintuitive at the surface—shouldn’t less stable slopes fail more quickly? However, the longer lifetime turns out to be the result of a competition between rock mass growth and removal. As mountains uplift, oversteepened rock mass grows, and the failure (or landslide rate) increases as well, removing chunks of rock and soil. But rock removal can’t quite keep pace with the accumulation of oversteepened rock mass, so the net result is a long-lived steep slope.

These new findings will help scientists who study landslides better estimate the risk from cliff faces failing. “We’re not yet to the point where we can say when a specific hillslope will fail,” said Seulgi Moon, a geomorphologist at the University of California, Los Angeles, and a study coauthor, but the findings could help local scientists identify cliff faces to monitor for potential landslide risks.

Fires in the Sierra Nevada likely to grow in frequency