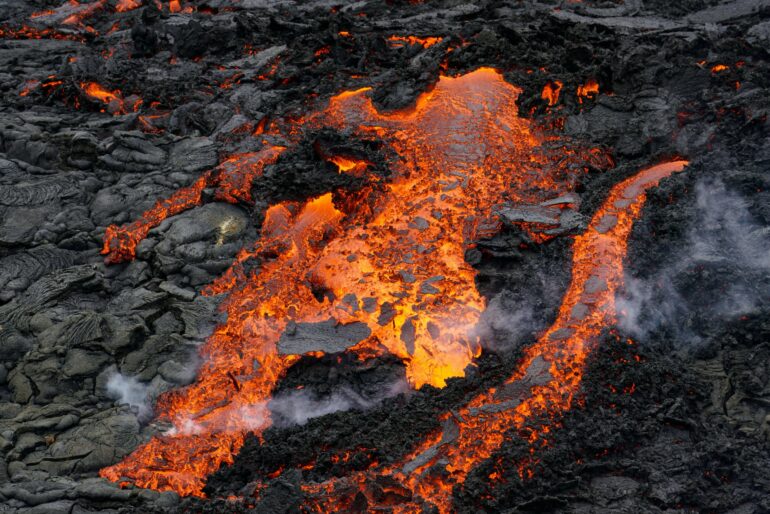 An unexpected series of eruptions at Stromboli may be due to changes in the volcano’s internal “plumbing.”

Changes to the layer separating the volcano’s reservoirs are allowing deeper magma to rise more quickly, which can trigger violent and unpredictable blasts.

A volcano that has been erupting almost constantly for thousands of years may be becoming more erratic.

Stromboli volcano, which lies on an island of the coast of Sicily, Italy, has fascinated scientists for centuries, and is one of the most researched and monitored volcanoes in the world.

However, a series of eruptions and violent blasts known as paroxysms in 2019 took everyone by surprise. New research suggests that the volcano’s internal ‘plumbing’ system may have changed, allowing magma from deep beneath the surface to rise more easily.

Dr. Chiara Maria Petrone, an expert in volcanoes at the Museum and the lead author of a new study detailing these changes, says, “The rejuvenation of Stromboli’s magma pathways has clear implications for the monitoring of the volcano.

The findings of the study were published in the journal Nature Communications.

Stromboli is a basaltic volcano, which is one of the most common types on Earth. These volcanoes generally erupt effusively, meaning that gas can easily escape from the magma chamber so that the magma escapes as lava flows.

Stromboli, however, is different from other basaltic volcanoes. It gives its name to a style of eruption characterized by short, explosive bursts that generate plumes which can reach hundreds of meters into the air and occur relatively regularly.

They are caused by gas bubbles bursting at a shallow depth in the magma, which throws the magma out of the volcano and creates a lava fountain.

Sometimes, more violent eruptions can occur. Major explosions are eruptions which tend to be a more intense version of a Strombolian eruption, and occur four to five times a year at Stromboli.

Paroxysms, meanwhile, are larger blasts that last for a short period of time, and are much more infrequent. Stromboli’s paroxysms can also be associated with pyroclastic flows of hot gases and debris, and also with tsunamis if they cause a lot of rock to fall down the mountain and into the sea.

In 2019, however, there was an unusual combination of a major explosion followed by two paroxysms in the space of two months which no one had anticipated.

“The activity in 2019 was very unexpected,” Chiara says. “All the monitoring signals suggested there Stromboli was more lively than normal, but it remained within the range of expected levels.”

“Even after the major explosion, none of the parameters were really abnormal, and so the two paroxysms weren’t detected until just before they were about to take place.”

Following the first paroxysm, Chiara applied for urgent research funding to investigate what was taking place at Stromboli, and to explain why these events were taking place.

How is Stromboli changing?

While double paroxysms are not unheard of, they are very uncommon. To find out what might be responsible, Chiara and her fellow researchers looked at minerals known as pyroxenes.

They compared the composition and texture of samples taken from Stromboli’s previous eruptions in 2003 to 2017, as well as those from the 2019 eruptions. By examining how these minerals differed, they could gain an insight into the inner workings of the volcano.

“There are two main ways paroxysms are triggered,” Chiara explains. “There is a bottom-up model, where magma from the deeper reservoir shoots up into the shallow reservoir without any chemical mixing taking place, which can cause a paroxysm.”

“The other model is a top-down model, with lava draining out of the shallow reservoir decompressing the top chamber. The resulting reduction in pressure allows the deeper magma to rise quickly without mixing with the shallow system.”

While it was previously thought that lava flow was a signal of an upcoming paroxysm, the researchers found that the 2019 Stromboli paroxysms were both driven by the arrival of magma from the deep reservoir.

It began arriving in the system in the months leading up to the paroxysms, picking up in the month before the first and continuing until the second occurred.

Chiara and her co-authors have attributed this to changes in the volcano’s crystal mush, which forms from the partial crystallization of magma.

“We know that there is a well-developed mush at Stromboli,” Chiara says. “In previous paroxysms, we found that some of the minerals from this layer were carried to the surface as the deeper magma passed through it and into the shallower system.”

“However, this wasn’t the case in 2019. We think that there is probably a more direct link between the deeper and shallower reservoirs caused by the magma permeating the crystal mush more fully, allowing magma to rise more frequently. This could explain why the activity of the volcano has become more variable.”

The team have called for the analysis of newly-erupted rocks to be sped up, so that researchers can better understand how volcanoes have changed over time.

“There were records of multiple paroxysms in Stromboli’s past, but we just didn’t realize that at the time,” Chiara says. “We need to better know the development of its volcanic system, as knowing how it behaved in the past allows us to better interpret the present.”