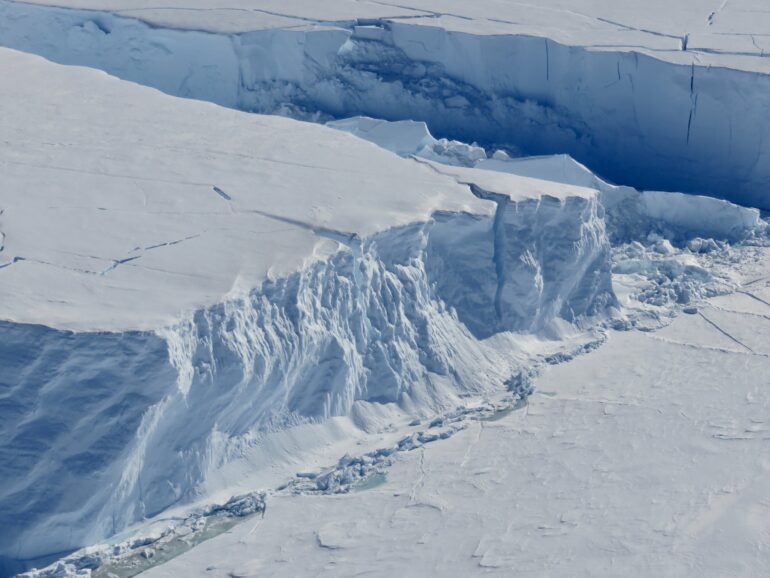 Researchers have discovered a process that can contribute to the melting of ice shelves in the Antarctic.

An international team of scientists found that adjacent ice shelves play a role in causing instability in others downstream.

The study, led by the University of East Anglia in the UK, also identified that a small ocean gyre—a system of circulating ocean currents—next to the Thwaites Ice Shelf can impact the amount of glacial-meltwater flowing beneath it. When that gyre is weaker, more warm water can access the areas beneath the ice shelf, causing it to melt.

The Thwaites Ice Shelf is one of the biggest ice shelves in West Antarctica and buttresses the eastern side of the Thwaites Glacier, which has been retreating rapidly over the last 20 years and is the largest contributor to global sea-level rise among Antarctic glaciers.

Using a unique dataset collected by sensors installed beneath the Thwaites Ice Shelf—which has also thinned and weakened significantly in recent decades—the researchers observed that the shallow layers of the ocean underneath it warmed considerably during the period from January 2020 to March 2021.

Most of this warming was driven by waters with a high volume of glacial meltwater originating from the Pine Island Ice Shelf, further east, flowing into the area beneath the Thwaites Ice Shelf.

The glacial meltwater mixes with saltwater when the ocean melts the base of ice shelves and can form a buoyant layer of water that is warmer than the
surrounding waters. This lighter, relatively fresher and warmer water brings heat that melts the base of the Thwaites Ice Shelf.

Lead author Dr. Tiago Dotto, of the Centre for Ocean and Atmospheric Sciences at UEA, said, “We have identified another process that could impact the stability of ice shelves, revealing the importance of local ocean circulation and sea-ice.”

“Circumpolar Deep Water, a warm variety of Antarctic waters, is a key player in melting the base of ice shelves. However, in this study, we show that a great amount of heat at shallow layers beneath one ice shelf can be provided by waters originating from other melting ice shelves nearby.”

“Therefore, what happens to one ice shelf, can impact the adjacent ice shelf, and so on. This process is important for regions of high ice shelf melting such as the Amundsen Sea because one ice shelf sits next to the other, and the export of heat from one ice shelf can reach the next one through the ocean circulation.”

Dr. Dotto added, “These atmosphere-sea-ice-ocean interactions are important because they can prolong warm periods beneath ice shelves by allowing warm and meltwater-enriched water to enter adjacent ice-shelf cavities.”

“Gyres potentially existing in other regions around Antarctica may also cause a greater number of ice shelves to be prone to intense basal melting associated with prolonged warm conditions, and as a result further contribute to global sea-level rise.”

In January 2020 colleagues from the US drilled holes in the ice and installed sensors monitoring temperature, salinity and ocean current beneath the Thwaites Ice Shelf.

For more than a year these sensors sent, via satellite, the data used to identify the ocean variations, for example how the temperature and meltwater content varied. From these observations, the researchers suspected that the excess of heat could not have originated locally at the Thwaites Ice Shelf because they did not see strong melting at the sites where the sensors were installed.

By combining the information with computer simulations to identify the origin of this heat, they found that the water that leaves the Pine Island Ice Shelf can access the areas beneath Thwaites Ice Shelf.

Satellite images also showed that the Southern Hemisphere summer season of 2020/2021 was unusual because it had a high concentration of sea ice in regions near the Thwaites Ice Shelf.

Drawing on the simulations and previous research, the team hypothesized that the gyre was even weaker, so the excess of meltwater from adjacent ice shelves could not be moved away from that region by the currents and instead entered the Thwaites Ice Shelf. This further reduced the strength of this gyre, which enabled the inflow of water with higher concentration of glacial meltwater beneath the ice shelf.

The study is published in the journal Nature Communications.