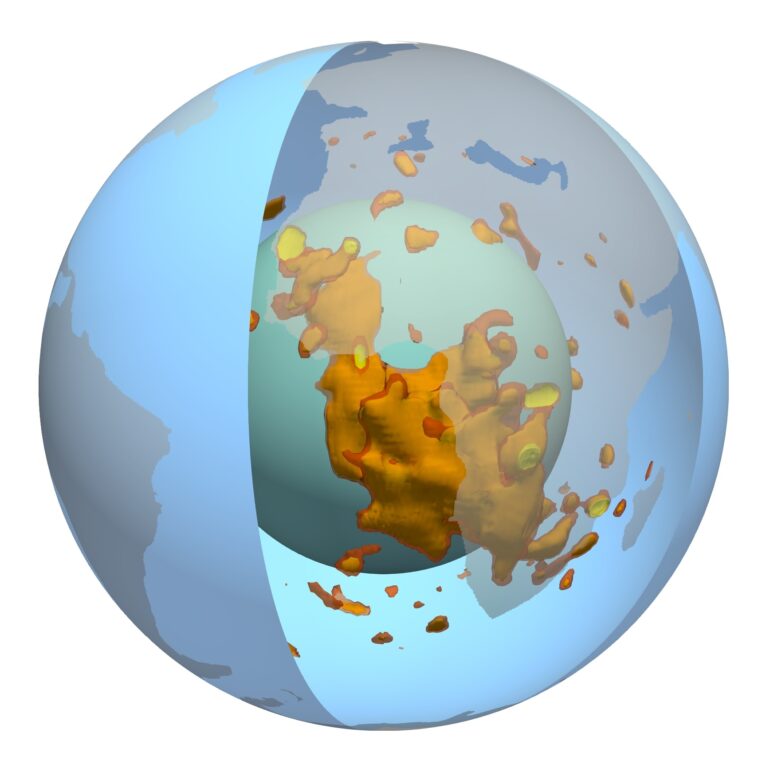 Earth is layered like an onion, with a thin outer crust, a thick viscous mantle, a fluid outer core and a solid inner core. Within the mantle, there are two massive blob-like structures, roughly on opposite sides of the planet. The blobs, more formally referred to as Large Low-Shear-Velocity Provinces (LLSVPs), are each the size of a continent and 100 times taller than Mt. Everest. One is under the African continent, while the other is under the Pacific Ocean.

Using instruments that measure seismic waves, scientists know that these two blobs have complicated shapes and structures, but despite their prominent features, little is known about why the blobs exist or what led to their odd shapes.

Arizona State University scientists Qian Yuan and Mingming Li of the School of Earth and Space Exploration set out to learn more about these two blobs using geodynamic modeling and analyses of published seismic studies. Through their research, they were able to determine the maximum heights that the blobs reach and how the volume and density of the blobs, as well as the surrounding viscosity in the mantle, might control their height. Their research was recently published in Nature Geoscience.

To conduct their research, Yuan and Li designed and ran hundreds of mantle convection models simulations. They exhaustively tested the effects of key factors that may affect the height of the blobs, including the volume of the blobs and the contrasts of density and viscosity of the blobs compared with their surroundings. They found that to explain the large differences of height between the two blobs, the one under the African continent must be of a lower density than that of the blob under the Pacific Ocean, indicating that the two may have different composition and evolution.

“Our calculations found that the initial volume of the blobs does not affect their height,” lead author Yuan said. “The height of the blobs is mostly controlled by how dense they are and the viscosity of the surrounding mantle.”

“The Africa LLVP may have been rising in recent geological time,” co-author Li added. “This may explain the elevating surface topography and intense volcanism in eastern Africa.”

These findings may fundamentally change the way scientists think about the deep mantle processes and how they can affect the surface of the Earth. The unstable nature of the blob under the African continent, for example, may be related to continental changes in topography, gravity, surface volcanism and plate motion.

“Our combination of the analysis of seismic results and the geodynamic modeling provides new insights on the nature of the Earth’s largest structures in the deep interior and their interaction with the surrounding mantle,” Yuan said. “This work has far-reaching implications for scientists trying to understand the present-day status and the evolution of the deep mantle structure, and the nature of mantle convection.”