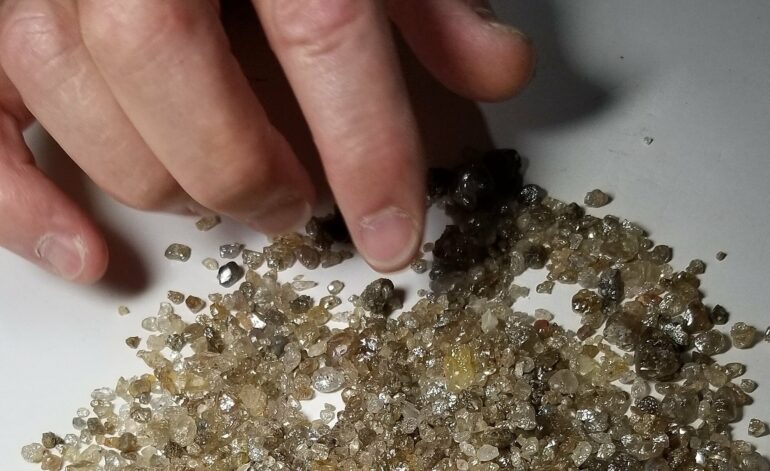 A unique combination of minerals trapped inside a “superdeep” diamond that originated hundreds of kilometers beneath Earth’s surface sheds new light on plate tectonics, the geological processes that give rise to mountains, oceans and continents.

One of the inclusions found in the diamond was a very pure example of the mineral olivine, a variety of which is more commonly known as the gemstone peridot. Most olivine found on Earth has some iron in it, so the purity of this olivine speaks to the unique conditions under which it was formed, according to an international study published last week in Nature.

The olivine’s purity, as well as some of the other minerals that were inclusions in this diamond, indicate a far deeper origin than usual for a diamond, between what’s called the transition zone and the lower mantle zone—420 kilometers to 660 kilometers beneath Earth’s surface. It also shows that the environment between these zones has an extremely variable oxygen content.

“To make this extreme composition [of olivine] and the overall mineral assemblage that we’ve got, the only way of doing that is to have a very deeply subducted oceanic plate or slab that goes down into the mantle, so you’re essentially pushing material from the surface of the Earth into the depths of the Earth,” says study co-author Graham Pearson, professor in the Department of Earth and Atmospheric Sciences and director of the Diamond Exploration and Research Training School.

“You get huge gradients in oxygen activity when you do that, and these big gradients are very conducive to driving extreme variations in composition of minerals,” he adds.

A crucial source of new knowledge

An understanding of these oxygen gradients helps explain how plate tectonics brings volatile elements back up into the mantle, and can also offer clues to how superdeep diamonds are formed—knowledge that can’t be gained any other way, according to Pearson.

“You can see oceanic slabs descending into the Earth in seismic images, but you don’t have any idea of the detailed structures they develop, or the mechanisms and chemistry going on in those slabs,” he says. “These diamonds provide a unique trace of that detailed chemical evolution as the slab’s going down.

“It’s amazing to document the buckling of these huge oceanic plates as they descend into the bowels of the Earth, by probing minerals that are tens of microns in size, trapped in diamonds.”

As we gain more insight into the movement of those slabs into the mantle, called subduction, we’re able to better understand plate tectonics, Pearson explains.

Plate tectonics is responsible for the formation of everything from mountains to oceans to continents, and even has an influence on Earth’s climate. Advancing our understanding of plate tectonics could also help us better comprehend natural events like earthquakes and volcanic eruptions, Pearson notes.

Diamonds are a scientist’s best friend

Superdeep diamonds, which originate from depths of more than 300 kilometers below Earth’s surface, are a treasure trove of scientific information because diamonds are uniquely able to preserve information about where they’re formed, including many of the physical and chemical processes that occurred during their formation.

Most other minerals lose much of that information by the time they make their way to Earth’s surface, but as Pearson explains, diamonds act almost as time capsules.

“There are many things at the surface of the Earth that can only be explained by processes happening at deep depths,” says Pearson.

“If you want to explain things you see at the surface—whether it’s economic mineralization, surface uplift or subsidence phenomena related to oil-bearing basins—you need an understanding of the structure, mechanics and properties of the deep Earth. Diamond is uniquely able to bolster that understanding.”