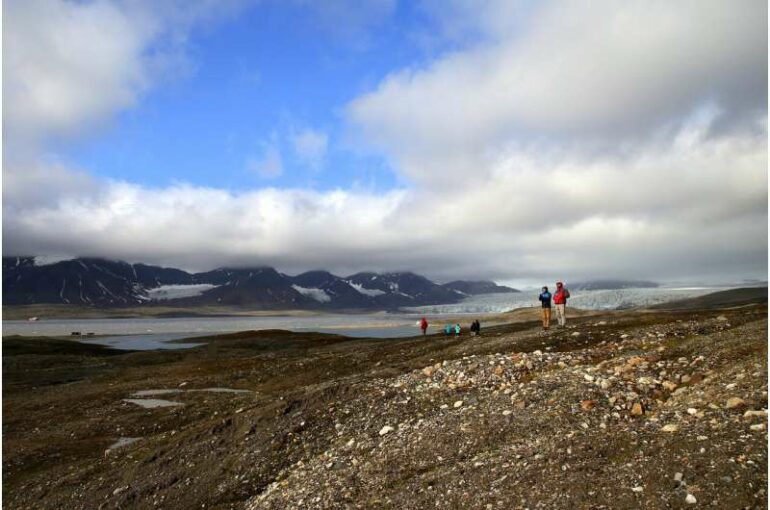 According to a new study, thawing of permafrost due to climate change could expose the Arctic population to much greater concentrations of the invisible, lung cancer-causing gas radon.

Professor Paul Glover from the University of Leeds and his co-author suggest that permafrost has historically acted as a protective barrier, blocking radon from traveling to the surface and entering buildings there.

Radon is an invisible, odorless, naturally occurring radioactive gas. It causes approximately one in 10 lung cancer deaths and affects smokers much more than non-smokers. It causes higher death rates in sub-Arctic communities due to the prevalence of smoking.

Their study, published today in the AGU journal Earth’s Future, modeled radon production, its flow through soil, permafrost and model buildings—including those with sub-surface and surface basements and those built, more traditionally, on piles.

They show that in buildings with basements, the presence of radon gas can increase to more than 100 times its initial value for up to seven years, depending on the depth of the permafrost and how fast the permafrost thaws.

This demonstrates the importance of not only keeping the permafrost layer intact by limiting global warming, but also has significant implications for health provision, building codes and ventilation advice.

The presence of a permafrost layer was found to act as a radon barrier, reducing surface radiation to a tenth of the background level, but increasing radon concentration behind the barrier by to up to 12 times. This was the case for a wide range of depths to the permafrost layer.

Professor Glover, from the School of Earth and Environment at Leeds, said, “Radon is known to be the second most important cause of lung cancer after smoking. Smoking also exacerbates radon-acquired lung cancer rates by about 26 times, and smoking is up to 4.4 times more prevalent in Arctic communities.

“Consequently, an unexpected plume of radon could represent a dangerous health hazard if it is not planned for. Fortunately, simply-installed ventilation is all that is often required if the problem is recognized.

“If the permafrost were stable, there would be no cause to be concerned. However, it is now widely recognized that climate change is leading to significant thawing of permafrost, with a 42% expected loss of permafrost in the Arctic Circumpolar Permafrost Region (ACPR) by 2050.

“The radon can then pass through the permafrost and lead to a plume of radioactive gas within buildings that take[s] several years to peak and many more to dissipate.”

The Earth’s Future publication suggests that thawing of the permafrost barrier produces no increase in radon compared to the background level for traditionally-constructed buildings in the Arctic community, which are built on piles.

For buildings with basements, permafrost thaw can result in the radon concentration remaining greater than the 200 becquerel per cubic meter (Bq/m3) value that many nations use as an action threshold, for up to seven years depending on the depth of the permafrost and the thaw rate.

Professor Glover added, “Our results show clearly that the pent-up reservoir of radon can be released into the basements of buildings over a long period and will remain above radiation action levels for four to seven years.

“Since there has been no perceived historical radon problem in these communities and the gas itself is undetectable without specialist devices, we regard this as an important and totally avoidable threat to the health of the northern communities.”

Professor Glover stresses that these are initial results that have had to include many assumptions, not least because there is a significant lack of data about petrophysical properties of Arctic soil and permafrost.

It is possible that radon will find efficient pathways to the surface through both advection and diffusion and along zones of preferential thawing while the bulk of the permafrost thaws more slowly.

Professor Glover is part of the Institute of Applied Geoscience and Petrophysics and Geomechanics group. Their work includes the theory, modeling, measurement and applications of Earth materials and processes. He was the founder and first president of the Energy, Resources and the Environment division of the European Geophysical Union.