The role of drought in Syrian war was exaggerated 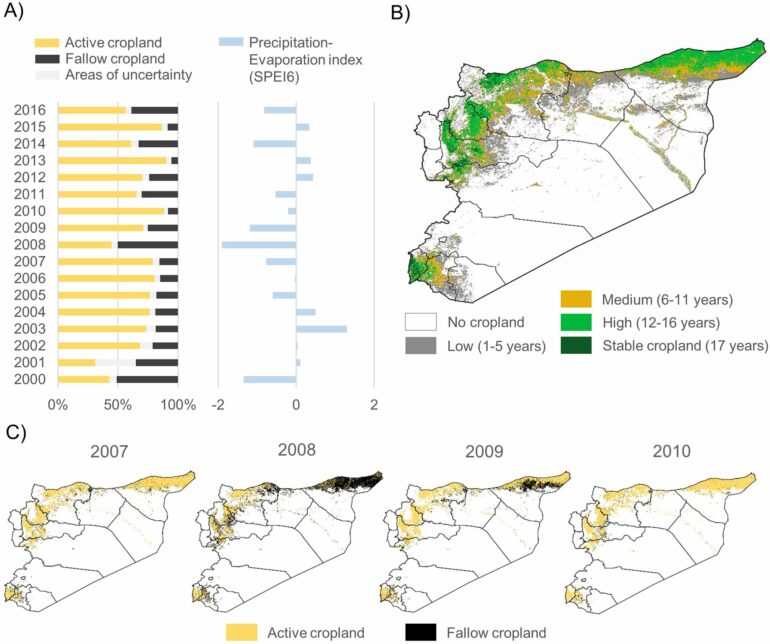 With the aid of satellite images, researchers at Lund University in Sweden have uncovered unique data on the severe drought that hit Syria between 2007 and 2009. Previously, many politicians and researchers believed that it was decisive for the outbreak of war in 2011. However, the new results, published in Communications Earth & Environment, indicate that agricultural land had already recovered by 2010.

When the war in Syria broke out in 2011, the country had been hit hard by drought for a few years. The water shortage had a negative effect on agriculture and led to an increase in migration among the rural population, resulting in unemployment and a general lack of resources.

The prevailing view has been that the drought played a decisive role in protests flaring up, and the war subsequently starting. However, the new results can establish that Syrian agriculture actually had recovered before the war broke out.

“The year before the protests began, agricultural activity was back at normal levels. It was thus a temporary bad harvest for one or two years. The role of drought in the conflict has often been exaggerated,” says Lina Eklund, physical geography researcher at Lund University.

Using satellite images, the researchers show that the impact of the drought on agriculture was greatest in the northeastern parts of the country. Another interesting observation was that there were no signs of land being abandoned on a large scale. This suggests that the migration the drought led to was temporary—people returned.

“The image of the Syrian war as a climate conflict has been spread by several world leaders, including Barack Obama. Within the research community, studies that have attempted to prove that the drought had a very large impact on the risk of conflict have often received more attention,” she says.

The new study provides an insight into how agriculture responds to drought and how this can be linked to migration and conflict. By learning more about what makes agriculture vulnerable, Lina Eklund hopes that politicians can become better at building sustainable societies.

“Our study shows that climate change, on its own, will not cause conflicts with large flows of refugees,” she concludes.


Citation:
The role of drought in Syrian war was exaggerated (2022, April 11)