The seasonality of oceanic carbon cycling 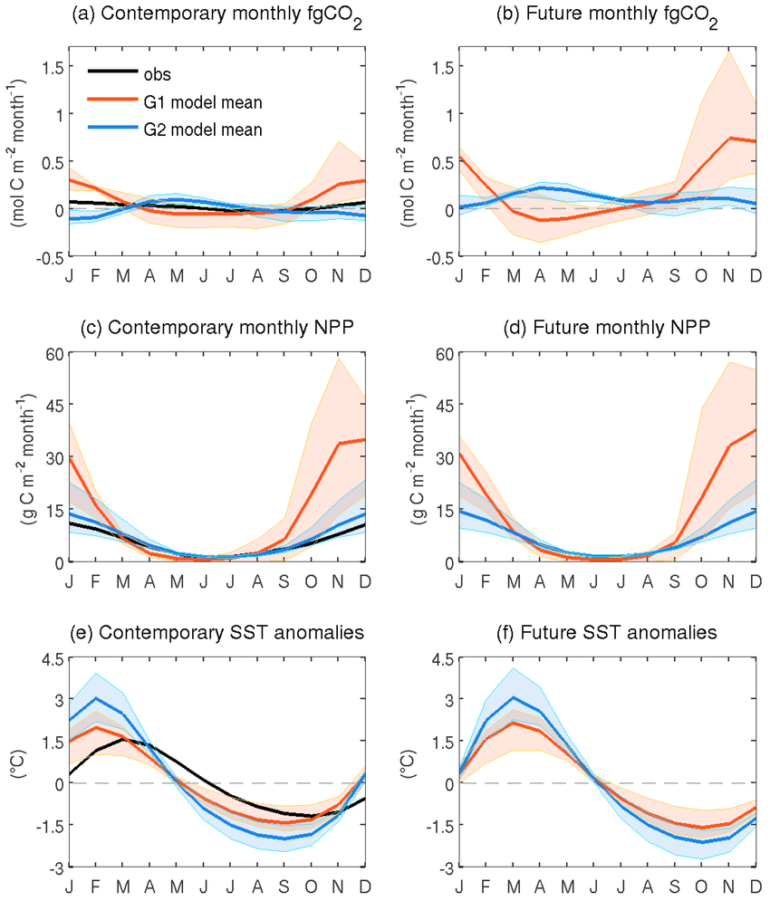 The ebb and flow of carbon within Earth’s systems are complex and ever-moving occurrences. Carbon is a nomadic element, traveling between the atmosphere, ocean, and the soil, rock, and ice of the planet, changing forms along the way. Much of this cycling takes place in the ocean, partially through a biological carbon pump (BCP). In the BCP, atmospheric carbon is fixed through phytoplankton growing at the surface of the sea. When the phytoplankton dies, carbon particles sink from the surface to deep ocean waters. This carbon can remain for hundreds or even thousands of years before returning to the atmosphere.

In the past, the BCP has been treated as a constant, but the variability of sinking carbon particles has been observed in sediment trap sampling over the past few decades. Now, de Melo Viríssimo et al. look at how the changing seasons can alter the amount and rate of carbon and other nutrients that sink into deep ocean waters.

The researchers used a global ocean biogeochemical model to see how the amount of carbon particles reaching the deep ocean would change with variations in seasonality. In particular, they looked at how both the pattern and the strength of the seasonality would affect the sinking speed of carbon particles and their attenuation throughout the water column.

When they compared their modeled seasonal results to nonseasonal scenarios, they found that there was an increase of up to 196% of carbon particle transfer when seasonal variations were taken into consideration.

Although their model was a simplified version of a complicated biogeochemical system, they found that particle fluxes in BCP are sensitive to the strength of seasonal fluxes, especially in high-latitude regions. The team notes that this study highlights the importance of seasonality on carbon flux, including the sinking speed and amount of detritus moving through the water column. The team adds that if other researchers assume BCP is constant, they may be underestimating how much carbon can be sequestered in the ocean.

Future work should collect new observations to unravel how seasonality can affect detrital sinking speeds. The authors also note that more nuanced inputs of other factors such as water temperature and phytoplankton sizes and species could reveal more details about BCP related to seasonal fluxes.