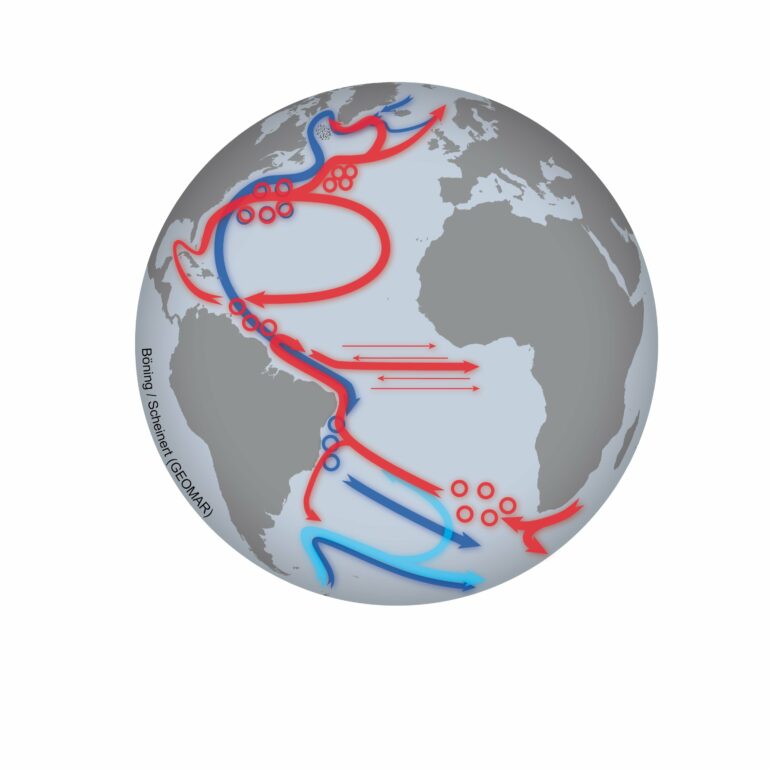 Is the Atlantic Meridional Overturning Circulation (AMOC) slowing down? Is this system of ocean currents, which is so important for our climate, likely to come to a halt in the future? Are the observed variations a natural phenomenon or are they already caused by human-induced climate change? Researchers from various scientific disciplines use a wide range of methods to better understand the gigantic oceanic circulation.

With a new publication in the scientific journal Nature Climate Change, researchers from Kiel contribute to the understanding of changes in the Atlantic Meridional Overturning Circulation (AMOC)—also known as the “Gulf Stream System.” It is important both for the global climate as well as for climate events in Europe. The authors focus on the question whether human-induced climate change is already slowing down this oceanic circulation. According to the new study, natural variations are still dominant. Improved observation systems could help detect human influences on the current system at an early stage.

“The AMOC provides Europe with a mild climate and determines seasonal rainfall patterns in many countries around the Atlantic. If it weakens over the long term, this will also affect our weather and climate. Other consequences could be a faster rise in sea levels at some coasts or a reduction in the ocean’s ability to take up carbon dioxide and mitigate climate change,” Professor Dr. Mojib Latif, Head of the Research Unit: Marine Meteorology at GEOMAR Helmholtz Centre for Ocean Research Kiel, explains. “We depend on the AMOC in many ways—but so far, we can only guess how it will develop, and whether and how strongly we humans ourselves will push it towards a tipping point where an unstoppable collapse will take its course.”

Using observational data, statistical analyses and model calculations, a team led by Professor Latif has therefore examined changes in the current system over the past one hundred years in greater detail. The results have now been published in the scientific journal Nature Climate Change. According to the researchers, part of the North Atlantic is cooling—a striking contrast to the majority of ocean regions. All evaluations indicate that since the beginning of the 20th century, natural fluctuations have been the primary reason for this cooling. Nonetheless, the studies indicate that the AMOC has started to slow down in recent decades.

Climate models consistently predict a significant slowing of the current system in the future as carbon dioxide emissions continue to rise, the ocean continues to warm, and the melting of the Greenland ice sheet accelerates. “Our results confirm earlier scientific findings. But the question remains how long we will remain in the realm of natural variability and when climate change will take control of the AMOC. Then the trend would only be in the direction of weakening and risks could increase significantly,” co-author and GEOMAR meteorologist Dr. Jing Sun points out.

Better observational data are needed to determine the critical limit, the authors conclude. “Systematic and sustained measurements of the changes already taking place across the Atlantic also allows us to say with greater certainty what influence climate change has on the AMOC current system today and in the future,” says Professor Dr. Martin Visbeck. The head of the Research Unit Physical Oceanography at GEOMAR is also co-author of the new publication. “At the moment, we do not see any clear signs that the system is slowing down dramatically—rather, it is fluctuating. But since the latest climate models agree that a significant reduction will occur, we should know how much longer we are on the relatively safe side of natural change.”