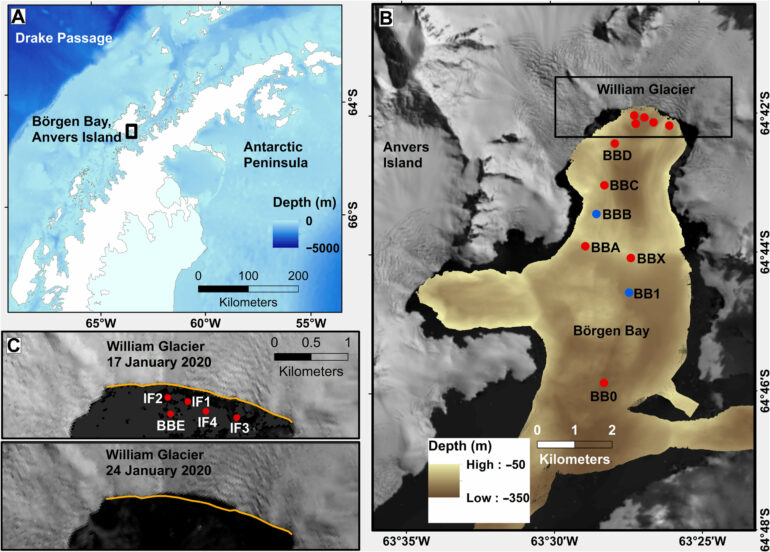 Scientists on a research vessel in Antarctica watched the front of a glacier disintegrate and their measurements “went off the scale.” As well as witnessing disruptions on the ocean surface, they recorded “internal” underwater tsunamis as tall as a house, a phenomenon that has been previously missed in the understanding of ocean mixing and in computer models.

Internal tsunamis are an important factor in ocean mixing, which affects life in the ocean, temperatures at different depths, and how much ice the ocean can melt. Ice in Antarctica flows to the coast along glacier-filled valleys. While some ice melts into the ocean, much breaks off into icebergs, which range in size from small chunks up to the size of a country.

A team on board the BAS research ship RRS James Clark Ross was taking ocean measurements close to the William Glacier, situated on the Antarctic Peninsula, as the front of it dramatically disintegrated into thousands of small pieces.

The William Glacier typically has one or two large calving events per year, and the team estimated this one broke off around 78,000 square meters of ice—around the area of 10 football pitches—with the front of the glacier towering 40 meters above sea level.

Before it broke away, the water temperature was cooler at around 50-100 meters in depth, and warmer below this. After the calving, this changed dramatically, with temperature much more even across different depths.

Lead author of the study Professor Michael Meredith, head of the Polar Oceans team at BAS, said, “This was remarkable to see, and we were lucky to be in the right place at the right time. Lots of glaciers end in the sea, and their ends regularly split off into icebergs. This can cause big waves at the surface but we know now it also creates waves inside the ocean. When they break, these internal waves cause the sea to mix and this affects life in the sea, how warm it is at different depths and how much ice it can melt. This is important for us to understand better.

“Ocean mixing influences where nutrients are in the water and that matters for ecosystems and biodiversity. We thought we knew what caused this mixing—in summer, we thought it was mainly wind and tides, but it never occurred to us that iceberg calving could cause internal tsunamis that would mix things up so substantially.”

Professor James Scourse, Head of the Department of Earth and Environmental Sciences at the University of Exeter, was Principal Scientific Officer on the RRS James Clark Ross at the time of the calving event, which was captured by a Sky News team on board at the time.

Two other scientists from Exeter have been central to the interpretation of the data captured, Dr. Katy Sheen and Ph.D. student Tobias Ehmen of the Centre for Geography and Environmental Science on the Penryn Campus.

“Often the most important and exciting discoveries in science are serendipitous—you happen to be at the right place at the right time with the right instruments and the right people—and because you know it’s important you just make sure you tweak the work plan to make the most of what nature has offered you,” Professor Scourse said. “We did that in Börgen Bay back in January 2020 and as a result we’ve produced the first data on a process that has implications for how fast the ocean is able to melt the ice sheets. This has implications for all of us.”

As opposed to the waves caused by wind and tides, tsunamis are caused by geophysical events where water is suddenly shifted, for example, by an earthquake or landslide.

Internal tsunamis have been noticed in a handful of places, caused by landslides. Until now, no one had noticed that they are happening around Antarctica, probably all the time because of the thousands of calving glaciers there. Other places with glaciers are likely affected also, including Greenland and elsewhere in the Arctic.

This chance observation and understanding is important, as glaciers are set to retreat and calve more as global warming continues. This could likely increase the number of internal tsunamis created and the mixing they cause.

This process is not factored into current computer models enabling us to predict what might happen around Antarctica. This discovery changes our understanding of how the ocean around Antarctica is mixed and will improve knowledge about what it means for climate, the ecosystem and sea level rise.

Professor Meredith remarked, “Our fortuitous timing shows how much more we need to learn about these remote environments and how they matter for our planet.”