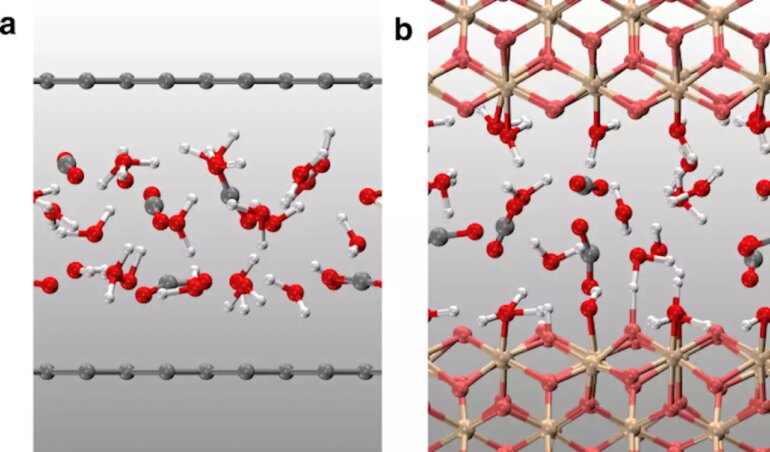 CO2 in the deep Earth may be more active than previously thought and may have played a bigger role in climate change than scientists knew before, according to a study by the Hong Kong University of Science and Technology (HKUST).

The research, led by Prof. Pan Ding, looked into the dissolution of CO2 in water, which has significant implications on ways to reduce the return of carbon from underground to the atmosphere.

The vast majority of the Earth’s carbon is buried in its interior. That deep carbon influences the form and concentration of carbon near the surface, which can in turn impact global climate over geologic time. It is therefore important to assess how much carbon lies in deep reservoirs hundreds of kilometers underground.

“Existing research has focused on carbon species above or close to the Earth’s surface. However, more than 90% of the Earth’s carbon is stored in the crust, mantle, and even core, which is poorly known,” Prof. Pan explained.

Using first-principles simulations in physics, his team found that CO2 may be more active than previously thought in Earth’s deep carbon cycle, which largely influences the carbon transport between Earth’s deep and near-surface reservoirs.

Confining CO2 and water in suitable nanoporous minerals may enhance the efficiency of underground carbon storage, the study found. It suggests that in carbon capture and storage efforts, turning CO2 together with water into rocks under nanoconfinement offers a secure method to permanently store carbon underground with a low risk of return to the atmosphere.

The findings have been published recently in the journal Nature Communications.

“Dissolving CO2 in water is an everyday process, but its ubiquity belies its importance. It has great implications for Earth’s carbon cycle, which deeply affect global climate change over geologic time and human energy consumption,” Prof. Pan said.

“It is an important step forward to understand the unusual physical and chemical properties of aqueous CO2 solutions under extreme conditions.”

Previous studies focused on properties of dissolved carbon in bulk solutions. But in deep Earth or underground carbon storage, aqueous solutions are often confined to the nanoscale in pores, grain boundaries, and fractures of Earth’s materials, where spatial confinement and interface chemistry may make the solutions fundamentally different.

“The carbon-bearing fluids can be as deep as hundreds of kilometers, which are impossible to directly observe. Experimentally, it is also very challenging to measure them under extreme pressure-temperature conditions found in deep Earth,” he said.

Prof. Pan is an associate professor of physics and chemistry at the university. The team also comprises doctoral students Nore Stolte and Rui Hou. They ran simulations to study the reactions of CO2 in water in nanoconfinement.

Comparing the carbon solutions nanoconfined by graphene, an atomic layer of graphite, and stishovite—a high pressure SiO2 crystal—with those dissolved in bulk solutions, they found that CO2 reacted more in nanoconfinement than in bulk.

The research is paving the way for studies into more complicated carbon reactions in water in deep Earth, such as the formation of diamonds, abiogenetic petroleum origin, and even deep life. As the next step of the study, the team hopes to explore if carbon may further react to form more complicated molecules like organic matter.

Prof. Pan develops and applies computational and numerical methods to understand and predict the properties and behavior of liquids, solids, and nanostructures from first principles. With the help of high-performance supercomputers, his team seeks answers to urgent and fundamental scientific questions relevant to sustainable development, such as water science, deep carbon cycle, and clean energy.