WWII shipwreck has leaked many pollutants into the sea, changing the ocean floor around it 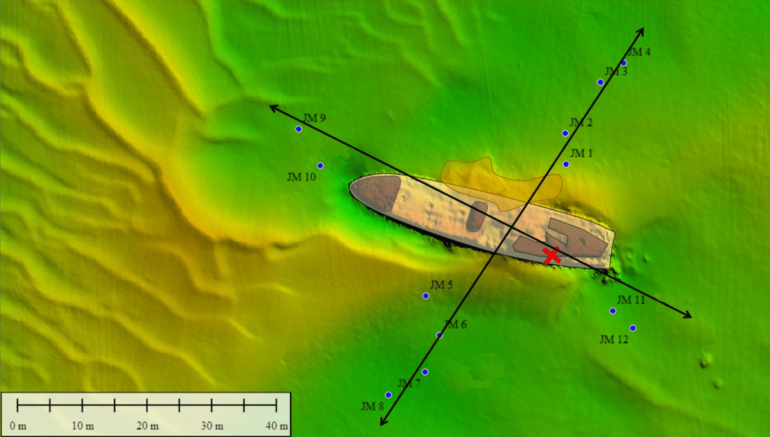 Researchers have discovered that an 80-year-old historic World War II shipwreck is still influencing the microbiology and geochemistry of the ocean floor where it rests. In Frontiers in Marine Science, they show how the wreck is leaking hazardous pollutants, such as explosives and heavy metals, into the ocean floor sediment of the North Sea, influencing the marine microbiology around it.

The seabed of the North Sea is covered in thousands of ship and aircraft wrecks, warfare agents, and millions of tons of conventional munition such as shells and bombs. Wrecks contain hazardous substances (such as petroleum and explosives) that may harm the marine environment. Yet, there is a lack of information about the location of the wrecks, and the effect they might have on the environment.

“The general public is often quite interested in shipwrecks because of their historical value, but the potential environmental impact of these wrecks is often overlooked,” said Ph.D. candidate Josefien Van Landuyt, of Ghent University.

For example, it is estimated that World War I and II shipwrecks around the world collectively contain between 2.5m and 20.4m tons of petroleum products.

“While wrecks can function as artificial reefs and have tremendous human story-telling value, we should not forget that they can be dangerous, human-made objects which were unintentionally introduced into a natural environment,” Van Landuyt continued. “Today, new shipwrecks are removed for this exact reason.”

“We wanted to see if old shipwrecks in our part of the sea (Belgium) were still shaping the local microbial communities and if they were still affecting the surrounding sediment. This microbial analysis is unique within the project,” explained Van Landuyt.

The V-1302 John Mahn was a German fishing trawler that was requisitioned during World War II to use as a patrol boat. In 1942, during “the Channel Dash,” it was attacked by the British Royal Air Force in front of the Belgian coast, where it quickly sank to the bottom of the sea.

To analyze the bio- and geochemistry around the shipwreck, the researchers took steel hull and sediment samples from and around it, at an increasing distance from it and in different directions.

They found varying degrees of concentrations of toxic pollutants depending on the distance from the shipwreck. Most notably, they found heavy metals (such as nickel and copper), polycyclic aromatic hydrocarbons (PAHs; chemicals that occur naturally in coal, crude oil, and gasoline), arsenic, and explosive compounds.

“Although we don’t see these old shipwrecks, and many of us don’t know where they are, they can still be polluting our marine ecosystem,” explained Van Landuyt.

“In fact, their advancing age might increase the environmental risk due to corrosion, which is opening up previously enclosed spaces. As such, their environmental impact is still evolving.”

Too dry, too hot, or too wet: Increasing weather persistence in European summer

They also found that the ship influenced the microbiome around it. Known PAH degrading microbes like Rhodobacteraceae and Chromatiaceae were found in samples with the highest pollutant content. Moreover, sulfate reducing bacteria (such as Desulfobulbia) were present in the hull samples, likely leading to the corrosion of the steel hull.

This study is only the tip of the iceberg, Van Landuyt explained: “People often forget that below the sea surface, we, humans, have already made quite an impact on the local animals, microbes, and plants living there and are still making an impact, leaching chemicals, fossil fuels, heavy metals from—sometimes century old—wrecks we don’t even remember are there.”

“We only investigated one ship, at one depth, in one location. To get a better overview of the total impact of shipwrecks on our North Sea, a large number of shipwrecks in various locations would have to be sampled,” Van Landuyt concluded.

Citation:
WWII shipwreck has leaked many pollutants into the sea, changing the ocean floor around it (2022, October 18)