Electrons hop to it on twisted molecular wires 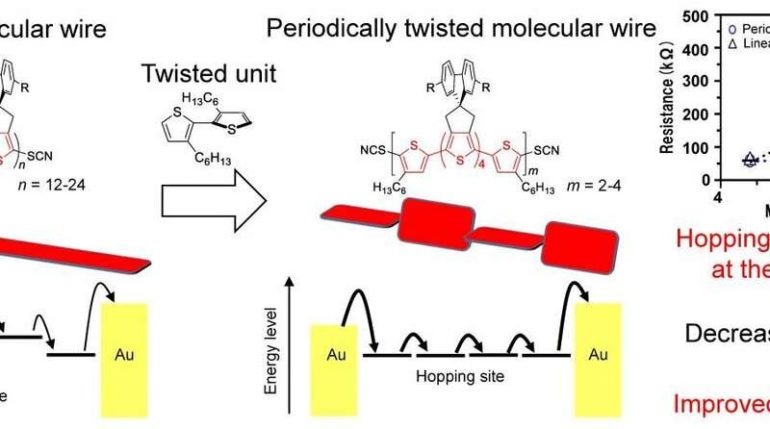 Organic conductors, which are carbon-based materials that can conduct electricity, are an exciting new technology. Compared with conventional silicon electronics, organic conductors can be synthesized more easily, and can even be made into molecular wires. However, these structures suffer from reduced electrical conductivity, which prevents them from being used in consumer devices. Now, a team of researchers from The Institute of Scientific and Industrial Research and the Graduate School of Engineering Science at Osaka University has developed a new kind of molecular wire made from oligothiophene molecules with periodic twists that can carry electric current with less resistance.

Molecular wires are composed by several-nanometer-scale long molecules that have alternating single and double chemical bonds. Orbitals, which are states that electrons can occupy around an atom or molecule, can be localized or extended in space. In this case, the pi orbitals from individual atoms overlap to form large “islands” that electrons can hop between. Because electrons can hop most efficiently between levels that are close in energy, fluctuations in the polymer chain can create energy barriers. “The mobility of charges, and thus the overall conductivity of the molecular wire, can be improved if the charge mobility can be improved by suppressing such fluctuations,” first author Yutaka Ie says.

The overlap of pi orbitals is very sensitive to the rotation of the molecule. Adjacent segments of the molecule that are aligned in the same plane form one large hopping site. By purposely adding twists to the chain, the molecule is broken into nanometer-sized sites, but because they are close in energy, the electrons can hop easily between them. This was accomplished by inserting a 3,3′-dihexyl-2,2′-bithiophene unit after every stretch of 6 or 8 oligothiophene units.

The team found that, overall, creating smaller islands that are closer in energy maximized the conductivity. They also measured how temperature affects the conductivity, and showed that it was indeed based on electron hopping. “Our work is applicable to single-molecule wires, as well as organic electronics in general,” senior author Yoshikazu Tada says. This research may lead to improvements in conductivity that will allow nanowires to become incorporated into a wide array of electronics, such as tablets or computers.