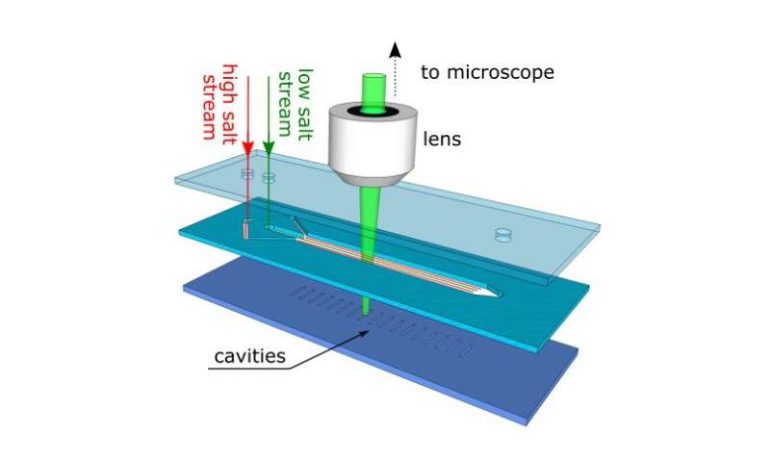 A spoonful of sugar may make the medicine go down, but a new Loughborough-led study suggests a dash of salt is key to progressing important medical areas such as drug delivery and biological sample analysis.

Naval Singh, a Ph.D. student in the University’s School of Aeronautical, Automotive, Chemical and Materials Engineering (AACME), and Dr. Guido Bolognesi, an expert in bioengineering, hope the new particle trapping mechanism they have developed will “open exciting new avenues for the development of new low-cost, portable and ultrasensitive devices for bio-analysis and diagnostics.”

Their latest study, published in the journal Physical Review Letters, shows how salt can be used to accumulate submicron particles in dead-end regions known as ‘microcavities’ in a matter of minutes and how the process can be reversed.

Biological fluids are full of particles and being able to trap and release them is a key underpinning capability for several technological applications, including the analysis of body fluids such as blood and saliva.

Diagnostics—such as virus detection—can be limited by the number of biological particles intercepted by the diagnostic instrument so the ability to concentrate particles in one area could lead to more accurate detection and as a result, earlier medical interventions.

Current methods to concentrate particles do exist, but they involve lab-based technology such as centrifuges and cannot be used to trap particles inside the body.

The team wanted to develop a mechanism that could be used to trap particles in both living and artificial biological systems.

They decided to focus on accumulating particles in dead-end regions, such as cavities and pores, as these are ubiquitous in both systems.

However, particle transportation to these regions is a true engineering challenge as something needs to drive the particles down into the well-like structures.

Dr. Bolognesi and Naval, in collaboration with experts in Loughborough’s Department of Chemical Engineering, Wolfson School of Mechanical, Electrical and Manufacturing Engineering, and France’s Institut Lumière Matière, explored if salt—which is known for being able to transport particles—could be used for this purpose.

The team ran a series of tests using a bespoke microchannel device, just a few times thicker than a human hair. The device contains microcavities and openings where researchers can inject salty water streams that then flow past the dead-end regions.

For this proof-of-concept study, the researchers looked at trapping commercially available rubber nanoparticles in the microcavities.

The test revealed that a slight difference in the salinity level [saltiness] of the water streams was enough to keep the particles stationary and the salt within the microcavities acted similar to a magnet, drawing the particles down into the dead-end regions.

In addition, they found the process could be reversed, which could have huge implications for applications that require the trapping and later release of particles, for example, the time-controlled delivery of multiple drugs into dead-end regions.

Dr. Bolognesi says though rubber was the focus of the study, the proposed strategy can be applied to biological particles, such as viruses and other extracellular particles usually found in blood, urine, and cerebrospinal fluid.

Of the research, Dr. Bolognesi said: “The beauty of this research is indeed that our innovative strategy for particle handling in miniaturized systems relies on something as simple and widespread as a bit of salt. Since nature is a far better engineer than any human, I wouldn’t be surprised if in the near future it is discovered that similar salt-driven mechanisms naturally occur within biological systems to facilitate the transport of biological materials within living organisms.”

He continued: “We are building on this research and our group is now working on the prototyping of at least two distinct in-vitro diagnostic devices based on this particle handling method.”

Naval, the lead author of the paper, added: “With our work published in Physical Review Letters, it is a promise of significant advance within the research field that unlocks potential implications on the investigation of soft matter and living systems as well as the design of biochemical and analytical microdevices. Millions of dollars are being invested in developing point-of-care (PoC) diagnostics devices and I reckon that this research will instigate a new generation of cost-effective PoC devices with testing applications for in vitro and other clinical diagnostics at lower costs, and high selectivity, sensitivity, and specificity.”