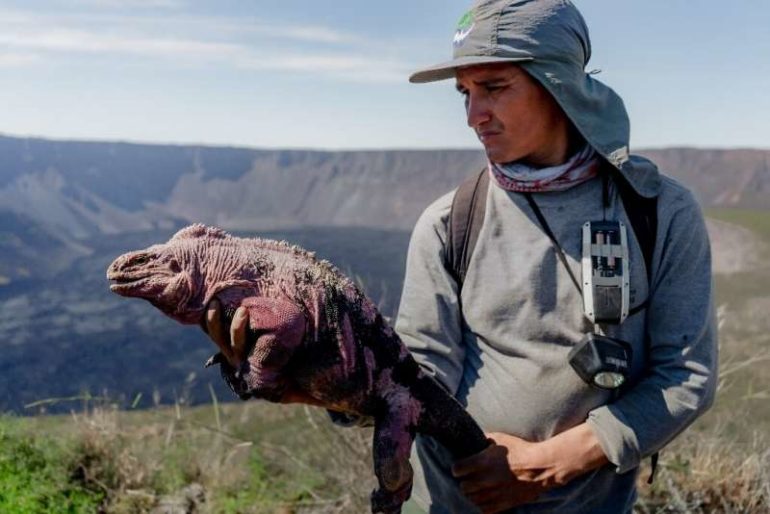 Around 30 scientists and Galapagos park rangers took part in the expedition this month on Wolf Volcano, in the north of Isabela Island—the largest on the archipelago.

“In the census, 53 iguanas were located and (temporarily) captured, 94 percent of which live more than 1,500 meters (4,900 feet) above sea level,” said the Galapagos National Parks (PNG) in a statement.

That allowed the experts to “estimate a population of 211 pink iguanas.”

The pink iguanas were first discovered in 1986 and identified as a separate species from the Galapagos land iguana in 2009.

They live exclusively in a 25 square kilometer (9.5 square miles) area on the Wolf Volcano, where the PNG has set up cameras to study the iguanas’ behavior and the threats they face.

Prior to the census, Ecuadoran expert Washington Tapia told AFP that there could be as many as 350 pink iguanas.

So far, “no juveniles have been discovered,” said Tapia, the director of the American Galapagos Conservancy NGO that took part in the expedition.

In quotes released by PNG on Friday, Tapia said “being restricted to one single site makes the species more vulnerable.”

“Urgent action is required to guarantee their preservation.”

The Galapagos Islands are a protected wildlife area and home to unique species of flora and fauna.

Did male and female dinosaurs differ? A new statistical technique is helping answer the question

The archipelago was made famous by British geologist and naturalist Charles Darwin’s observations on evolution after visiting the islands.