Fingerprint for the formation of nitrous oxide emissions 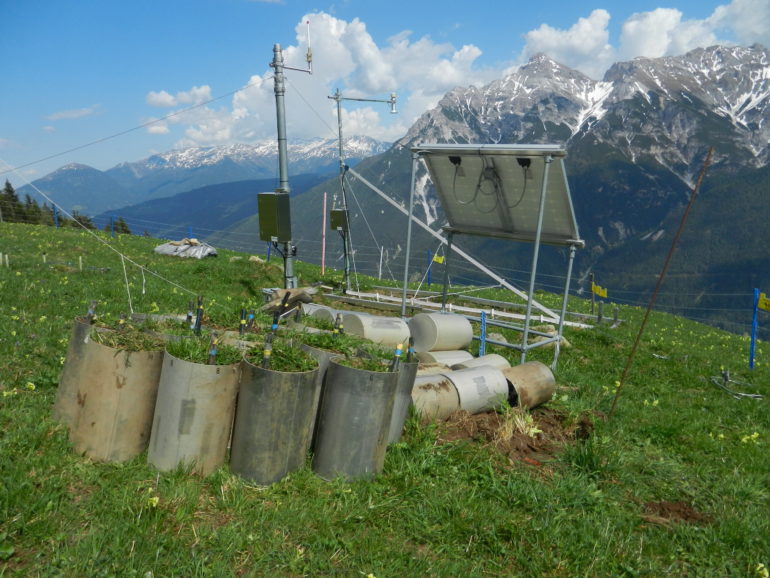 Scientists led by Eliza Harris and Michael Bahn from the Institute of Ecology at the University of Innsbruck have succeeded in studying emissions of the greenhouse gas N2O under the influence of environmental impacts in an unprecedented level of detail. The study, which has now been published in Science Advances, is thus also a starting point for the creation of models that could predict future trends in the greenhouse gas emission dynamics of ecosystems under global climate change.

Nitrous oxide (N2O) is a potent greenhouse gas whose atmospheric growth rate has accelerated over the past decade. The largest share of anthropogenic N2O emissions results from the fertilization of soils with nitrogen, which is converted into N2O via various abiotic and biological processes. A team of scientists led by Eliza Harris and Michael Bahn from the Functional Ecology research group at the University of Innsbruck has now been able to trace in detail the N2O production and consumption pathways that occur within the nitrogen cycle, and ultimately lead to the emission of this greenhouse gas, as part of the FWF-funded project NitroTrace. In an experimental setup at the University of Innsbruck, 16 intact grassland monoliths of the subalpine Long-Term Ecosystem Research (LTER) site Kaserstattalm in the Stubaital region of Tyrol were studied. The soil blocks were exposed to extreme drought and subsequent rewetting. These weather conditions reflect the climatic changes to which many regions across the globe, including the Alps, are increasingly exposed.

“Our goal was to quantify the net effect of drought and rewetting on N2O formation processes and emissions, which is currently largely unexplored,” says Eliza Harris. Contrary to expectations of the researchers, the process of denitrification, the breakdown of nitrate to N2O and molecular nitrogen (N2) by specialized microorganisms, was found to dominate N2O production in very dry soils.

According to previous assumptions, this process takes place primarily in moist, oxygen-poor soils, and as a result more N2O can be released into the atmosphere during drought than expected. The researchers had expected the process of nitrification to predominate in dry soils, producing nitrate, which is an important chemical compound for plants. “We assumed that if the soil was dry, there would be enough oxygen available for nitrification. After closer examination, we were able to detect drought-induced accumulations of nitrogen-containing organic matter on the surface of our soil samples and identify them as triggers for denitrification in dry soil. This suggests a strong role for the previously poorly understood chemodenitrification and codenitrification pathways, where additional abiotic and biotic processes lead to the formation of N2O,” explains Eliza Harris the surprising result. Overall, N2O emission was greatest during rewetting after extreme drought.

The results provide researchers with unprecedented insights into the nitrogen cycle and the processes involved in the formation of the greenhouse gas N2O in response to environmental parameters. A better understanding of production and consumption reactions can help to find solutions to reduce greenhouse gas emissions, which have been increasing for decades.

Crucial to the research success was the use of laser isotope spectroscopy, made possible through the FFG-funded project LTER-CWN. “Through this novel analytical technique, we can determine the isotopic composition of N2O. Thus, we get a kind of fingerprint for the formation process of the emitted N2O, which in turn helps us to understand its microbial formation process,” emphasizes Eliza Harris the importance of this procedure. Molecular ecology analyses also helped them determine which genes and microbes were involved in the nitrogen transformation. In addition, spatial analysis techniques helped determine elemental composition and distribution in the soil. “We hope that by continuing to apply the combination of these methods in future similar research projects, we will gain further insights into feedback effects between climate change and the nitrogen cycle across different ecosystems and environments,” says Eliza Harris. The researchers’ long-term goal is to use models to predict ecosystem emission dynamics in the context of climate change.

Multivitamins’ ‘benefits’ are all in your head: study