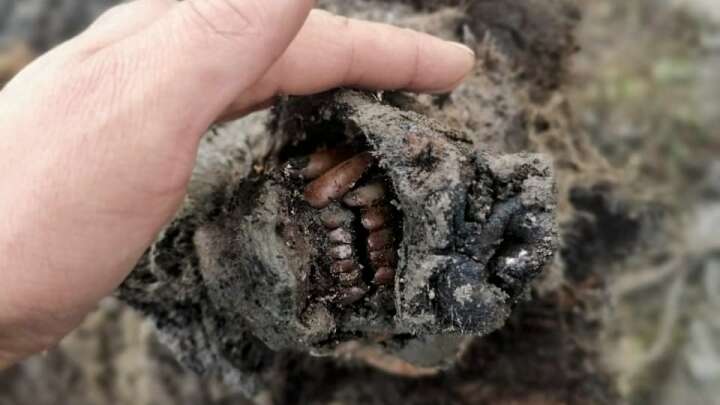 For the first time, the stunningly preserved corpse of an adult cave bear has been discovered after being frozen for at least 22,000 years in the depths of Siberia.

The body of the extinct animal was discovered on the Lyakhovsky Islands in far northeastern Russia by reindeer herders and will now be analyzed by scientists at the North-Eastern Federal University (NEFU) in Yakutsk, a leading research institution when it comes to the study of extinct Ice Age species. This newly discovered frozen adult is thought to be between 22,000 and 39,500 years old, but the researchers are looking to carry out a radiocarbon analysis to pinpoint a precise age.

“This is the first and only find of its kind – a whole bear carcass with soft tissues. It is completely preserved, with all internal organs in place including even its nose,” Dr Lena Grigorieva, a researcher at NEFU, said in a statement. “Previously, only skulls and bones were found. This find is of great importance for the whole world.”

The NEFU also announced they had discovered the preserved carcass of a cave bear cub on the mainland of Yakutia, which the say scientists they should be able to obtain DNA from.

The cave bear (Ursus spelaeus) is a prehistoric species or subspecies that lived across much of Eurasia until it fell into extinction about 15,000 years ago. Numerous factors were behind their demise, but it’s thought a major factor was being over-hunted by humans and Neandtherals.

Hunting this animal is a pretty impressive feat considering their size. The species could grow larger than even the biggest grizzly or polar bear, with some specimens weighing as much as 1,000 kilograms (2,200 pounds). But despite this ferocious size, they were actually herbivores that ate a mainly plant-based diet. It’s also known that between 0.9 and 2.4 percent of the DNA found in brown bears originated from cave bears, meaning their gene pool still lives on in modern-day species.

Warming temperatures in recent years has seen increasing amounts of Siberia’s permafrost thawing. While it is bad news for a number of reasons, it has helped to reveal an array of extinct beasts from the Ice Age, including mammoths, woolly rhinos, birds, several puppies, and cave lion cubs. Scientists are understandably excited.

For this new specimen, leading experts from Russia and beyond are being invited to analyze the animal using a range of scientific techniques, from genetic analysis to microbiological, in one of the most ambitious research projects of its kind.

“The research is planned on as large a scale as in the study of the famous Malolyakhovsky mammoth,” said Dr Grigorieva, leading researcher of the International Centre for Collective Use of Molecular Paleontology at the NEFU’s Institute of Applied Ecology of the North.