Fruit fly egg takes an active hand in its own growth, highlighting parallels to mammals 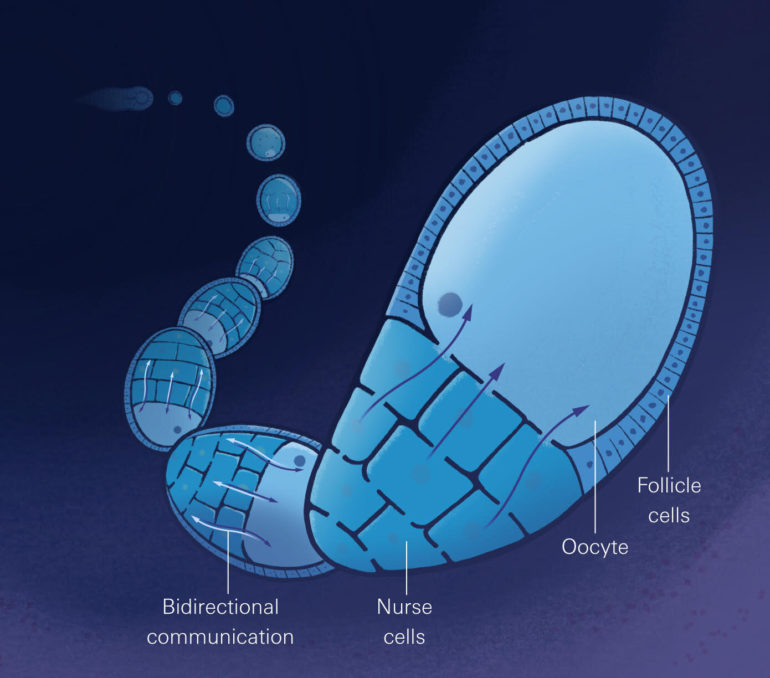 A cast of so-called ‘nurse cells’ surrounds and supports the growing fruit fly egg during development, supplying the egg—or ‘oocyte’—with all the nutrients and molecules it needs to thrive. Long viewed as passive in this process, the Drosophila egg actually plays an active role not only in its own growth, but also in the growth of the surrounding nurse cells, Princeton University researchers report on March 21 in Developmental Cell.

“Here we show an example of bidirectional communication—a dialogue—between different cells. The egg is taking an active hand in controlling its own feeding by these supporting cells,” says Stanislav Shvartsman, head of the developmental dynamics group within the Flatiron Institute’s Center for Computational Biology and professor of molecular biology at Princeton. The discovery of bidirectional communication in fruit flies has implications for understanding development in mammals, in which the egg is also nursed by surrounding cells.

The research was led by Shvartsman and Elizabeth Gavis, also professor of molecular biology; Caroline Doherty was lead author, and Rocky Diegmiller and Manisha Kapasiawala contributed to the study.

In early development, four cell divisions give rise to the 16 connected cells that make up the Drosophila germline cyst, the first structure formed during gamete development. One of these becomes the egg; the other 15 cells support the egg’s dramatic growth by supplying it with vast quantities of nutrients that travel via intricate microtubule networks, and through cytoplasmic connections between the egg and nurse cells. Until now, scientists have viewed the oocyte as merely a passive recipient. The observation of groups of nurse cells that vary in size according to their distance from the oocyte led the researchers to suspect that some type of cell-cell communication occurs, says Shvartsman. Since cell size and cell cycle are tightly correlated, investigating the factors influencing the nurse cell cycle was the clear next step, says Doherty.

Researchers honed in on a protein called Dap (short for ‘Da capo’, meaning ‘from the top’), which is known to influence cell cycle progression. Nurse cells supply the oocyte with RNA molecules needed to make the Dap protein. Doherty noticed that oocyte-manufactured Dap protein appeared in the nurse cells, at a rate suggesting that it diffused from the oocyte. After fusing a tiny Dap-recognizing antibody (called a nanobody) to a protein that could trap Dap within the egg, Doherty saw a decrease of the Dap level in the nurse cells. Together, these experiments showed that once the egg makes Dap, it diffuses to the very nurse cells that donated Dap RNA, providing the first evidence for two-way oocyte-nurse cell communication in fruit flies. “It was so exciting to see the oocyte is communicating with the nurse cells—this is something scientists hadn’t considered,” says Gavis. Further, the egg communicates via Dap, which controls the nurse cell cycles, which in turn influence the egg’s growth. So, in a feedback loop, “the egg is controlling the growth of the cells that load it with nutrients and information” says Doherty.

To better understand the logic of this bidirectional communication, researchers modeled the system as a network of coupled oscillators: models based on the biochemical clocks that drive cell cycles. The model underscored the role of a diffusible cell cycle inhibitor (like Dap) in creating a hierarchy of cell sizes similar to what is observed in Drosophila. Importantly, it also showed the oscillators must be tuned within a specific range to establish a feedback loop that gives the egg the right amount of sustenance for proper growth and viability. “These 16 cells make up one of the simplest systems in which we can dissect this sophisticated feedback loop,” says Shvartsman.

The discovery of bidirectional communication in fruit fly development points to the notion of universal mechanisms at play in biology, as back-and-forth communication between the oocyte and supporting cells is also seen in mammals. “This study opens up the possibility to discover many more instances of this kind of cellular crosstalk in development,” says Yukiko Yamashita, professor of biology at the Massachusetts Institute of Technology. Although previous work on mammals focused on the egg’s control of the metabolism of surrounding cells, this study may spur researchers to investigate the egg’s impact on cell cycle regulation in mammals, says Francesca Duncan, co-director of the Center for Reproductive Science at the Feinberg School of Medicine at Northwestern University. “This work solidifies the parallels between fruit flies and mammals,” adds Gavis.

New planet detected around star closest to the sun